How Tattoos, Powdered Wigs, and Uggs Have Made Us Who We Are

Posted on February 27, 2013 by David L. Rice Library
Be honest, how much time to do you spend on your looks in the morning? Do you have piercings or tattoos, or dyed hair? What does any of that say about you? You would be surprised how much things like that have changed over the years, or depending on where you are in the world. Hair styles, tattoos, piercings, and other body additions say something about you, and the culture you come from. And I don’t just mean those people who get their favorite bands tattooed on themselves. I mean real cultural tells, like how women in Europe refused to wear bangs in the Middle Ages, because they were considered manly and secretive. Or you can look at henna tattoos in India, with multiple meanings behind their elaborate patterns. Even simple things, like how long your hair is, or how much make-up you’re wearing, have years of history leading up to how much gel I put in my hair this morning. And yes, we DO have reference books about this, so let’s get reading!
Encyclopedia of Hair: A Cultural History 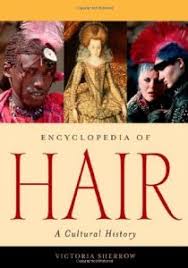 Yep. Entire book dedicated to hair. I do love the library’s Reference section. This book goes through the whole history of hair styles, and there is a lot more to hair than that time in the 90s when everyone thought that not washing your hair was really fab. Like how in the 1600s, hair was a major factor in the conflict between Puritans and Royalists in England that broke out into an all-out war (Our powdered wigs are WAY better than your stupid wigs!) In ancient Greece, women shaved all the hair on their body, except the head, but later on in the ancient world, body hair on a woman was seen as attractive. Sometimes, hairstyles are not exactly trends, as much as laws. In the Byzantine Empire, Emperor Theophilus made a law that all men had to have short hair, supposedly because he was bald and had a major case of hair envy. That’s just a few bits of trivia available here; maybe I’ve gotten you interested in finding out more from the book! Because no matter what culture or time period you come from, we can all bond over the fact that our hair never looks quite the way we want it to. Bad hair days have always been around.

Feet and Footwear: A Cultural Encyclopedia 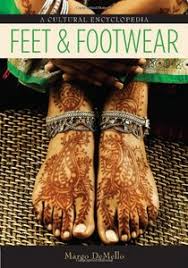 We go from the top of the body to the bottom in this reference book about…feet and footwear. Feet and shoes really take so much abuse, being the things that have to take the blunt of our weight, as well as dealing with whatever sidewalk terrors await us on the way to class. This book talks about modern shoes like Nikes or Candies, mostly about how they advertise, using celebrity endorsements in shoe wear. In modern culture, shoes are a status symbol, and having popular celebrities wear them makes them seem like higher status items. Hilariously, it also talks about Ugg boots, a super trendy shoe that literally is short for ‘ugly.’ They were originally used by Australian sheep herders, before surfers started wearing them for comfort, followed by the hipsters, and then the world (I can’t judge too harshly, I own a few pairs. I like the style, so don’t judge me either.) There is also information about not so funny things, like ancient Chinese foot binding (don’t Google pictures, it will haunt your dreams) and old-time foot amputation. With a saw and maybe a glass of booze to dull the pain. Ouch. So, take care of your feet and make good choices on your footwear, and I promise we will put away the saws.

Faces Around the World

When you look at a face, what do you see? This book, from the library’s ebrary Academic Complete collection, looks at faces. All kinds of them, like Catholics with forehead ashes on Ash Wednesday, masks in Mexico during the Day of the Dead, Bindis on Indian women, all things that need some cultural context before you can really understand them. There are also a LOT of facial tattoos pictured in the book. Some are culturally symbolic, meant to indicate power or wisdom, and some exist just because they look cool. Some are just a few colors and symbols, and others cover the whole face with symbolic lines and patterns. But it’s not all tattoos and funky masks. Did you know that freckles have been thought of as both beautiful and a mark of the devil throughout history? That uni-brows in Central Asia are considered so attractive that people add makeup to their brows to enhance them? That this ebook is full of tons more information? All those questions answered here!

So what’s the lesson here? That we should all be happy that forbidding body embellishment is officially out? Don’t have longer hair than your emperor? Or just that what we look like has always had a ton of cultural and historical relevance? There is a lot more to talk about with all this, so check out these books. Trust me, after you have seen a “sharpening stone”, you will never forget to thank the hair salon people ever again.

Like Loading...
This entry was posted in Faces, Feet and Footwear, Hair styles, world culture. Bookmark the permalink.