Spartans, Authors, Inventors, and Other Women Who Made History

Posted on March 5, 2013 by David L. Rice Library
Happy March everyone! Did you know that March is National Women’s History Month? Well now you do, and I’m going to dedicate some blogs to some awesome women of the past, as well as some of the equally awesome women of the present. But first, we talk history. It hasn’t been easy being a woman. In many countries, women have been oppressed, belittled, and generally looked down upon as stupid girls who apparently had cooties or something. But just because it was tough for women to get things done, what with society against them and all, doesn’t mean they didn’t try! So today we look at some of the accomplishments of the ladies of yesteryear, and at the impact they still have on us today. And I swear, if one person makes the inevitable “make me a sandwich!” joke, I’ll make you eat one of my sandwiches, and trust me, that’s punishment enough.
Uppity Women of Ancient Times/Medieval Times/The Renaissance by Vicki Leon

For some reason, people tend to assume that since women have often been underestimated and oppressed, that they have not done anything worth talking about in the history books. This assumption is extremely inaccurate. A lot. Women have been accomplishing great things for all of history, and if you’re interested in learning about some of these lesser known ladies, these books are a great place to go. The books, each one about women of a specific time period, are light hearted and funny. They make jokes, and have a breezy style to them, but at the same time, are full of genuinely interesting bits of historical information. Each section tells the tale of one woman (or group of women) who made history, or at least attempted to. I am a sucker for books about random historical trivia, so these are just my style. In Uppity Women of Ancient Times, we learn about women like Elissa, a Phoenician woman who founded the ancient empire of Carthage when not living one giant personal melodrama, and Cynisca, a Spartan lady who was one of the first women to win medals in the Olympics, in the 4-horse chariot race, no less. In the Middle Ages, we meet Artemisia Gentileschi, who had endless miseries put upon her, before becoming a successful painter and the first woman to join Florence’s prestigious painters guild.  In the Renaissance, we meet Widow Trepperel, who made her fortune publishing trashy romance novels around 1545, and Bess Talbot of Hardwick, who through multiple marriages and smart investments, had so much money by the end of her life she could pretty much buy half of Europe. As you can see, no matter when and where she was born, it’s hard to keep a good (or at least business savvy) woman down.
Well-Behaved Women Seldom Make History     by Laurel Thatcher Ulrich 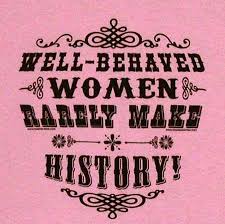 You have probably heard or seen that phrase once or twice, usually in an inspirational speech or on someone’s car bumper. But there is a lot more to it than that. The phrase was coined by Laurel Thatcher Ulrich, an historian and author who specializes in feminist theory. In the intro to her book, Ulrich expresses a bit of surprise about the popularity of her quote, but also looks at what exactly it means. She wonders what exactly it means to be “well-behaved”, and what exactly the definition of that is. Does it mean fighting gender discrimination or standing up for workers’ rights, or publishing your drunken rants on YouTube every night? Then it moves on to other chapters, telling the stories of famous female writers, female revolutionaries, slaves, and other women trying to change the status quo. She also talks about individual women, like Ada Lovelace, who created a blueprint for computers decades before anyone got around to building one. There’s also an interesting chapter about Amazons, and their impact on ancient culture, as well as more modern interpretations. This leads into a discussion about Ms., a feminist magazine that started in the 1970s, that we’re going to be talking about later! Ulrich’s book is a good read, especially if you’re interested in the history of feminism, really radical women, or bumper stickers. BTW, there’s another hot bumper sticker around: Write Women Back Into History! 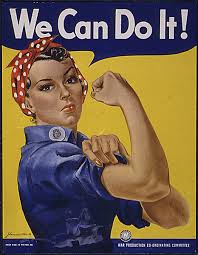 There are a lot more great books to read about the history of women, and all the ways they have contributed to the world [have a look through the HQ section of books on 3rd floor.] Feminism means a lot of things to different people, and it’s something that it’s hard to get into discussing, considering how strongly people feel about it. But really, that’s not what this blog is about. It’s about the ladies of the past who have changed history, made bank, stood up for what they believed in, and kicked a lot of you know what. All without cooties, as far as I know. This month, check out some of these books in honor of these ladies, and all they’ve accomplished, and hear their stories before the inevitable Queen Nefertiti movie is green lighted (come on Hollywood, make it happen.)
CP