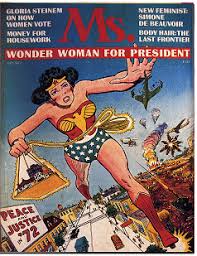 Have you heard of Ms. Magazine? Some new blog, or fem crit book? Coming out in the wake of this whole War on Women thing we keep hearing about? Well, look back a little bit more. Ms. is a feminist magazine co-created by famous feminist Gloria Steinem in January 1972. The feminist movement had been going on for quite some time at that point, but there was a lot of work yet to be done. For the record, feminism is a collection of ideologies and movements that strive to create equal rights for women. It’s NOT about angry female liberal arts students burning their bras and screaming about “evil male patriarchal phallic symbols.” Just to get that out of the way. Anyway, Steinem and other like-minded feminists decided they wanted to create a magazine written by women, for women, about women’s issues. At first, publishers expected it to be a sort of proto HGTV/ Better Homes and Gardens sort of magazine, but boy were they wrong. The first issue sold out in just days, dealing with topical women’s issues like abortion, women getting less pay then men for doing the same work, lesbianism, and the general struggles of women (it also had Wonder Women on the cover, which is pretty cool). This was a huge deal, and the magazine stirred up both controversy and praise. And guess what? It’s still in print (and online) today! 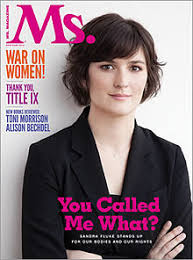 While Ms. isn’t quite the force it was back in the 1970s, it’s currently trying to appeal more to young people, and figure out its relevance in today’s culture. In my opinion, its writers still seem like they have some important things to say. In the issues I’ve read (including the 40th Anniversary issue, which recreates the famous Wonder Woman cover), they have covered everything from domestic abuse, women involved the in Occupy Movement, women’s issues abroad, women voters, and yes, the War on Women. If you don’t know much about that…it’s a touchy subject for a lot of people, so I would encourage you to do your own research. Maybe grab an issue of Ms. Magazine? The articles are interesting and well written, and I like the variety of issues they discuss. It’s not all politics and social reform, there is also information about female writers, politicians, and tech geeks that are just fun and likable. And it doesn’t really fall into that unfortunate “all men are EVILLLLL” thing that seems to seep its way into some feminist discussions. At least, I didn’t notice anything in the stuff I read, and I have only read the very recent issues. Like with all things political, I can’t tell you what to think about its feminist/liberal tendencies, or really get into what I personally think about the issues discussed. Beyond, you know, women should be equal to men(which I REALLY hope most people already think) and they should have more representation in government and the media in general. And despite all the talk about equality, women STILL make only 77 cents for every dollar a man earns. And domestic violence is really bad. Again, hope you just kinda know that. There, I talked about my personal political views on the internet. Come at me bro!
But for real, I haven’t read every issue, so I don’t know if I agree with every article ever written here. I don’t even know if I totally agree with every article I have actually read. But, I’m glad I read them. As I have said before, when it comes to political and social issues, we need to at least talk about them; even if you disagree, or the subjects are awkward to talk about, talk about them we must. I had heard vaguely of the magazine and its relevance in the 70s, but I was surprised to see how many of the issues they discussed then, still seemed fresh in these newer copies of the title. So, 40 years later, is Ms. Magazinestill relevant? I would say a very enthusiastic yes. Issues facing women are far from over, and neither is the importance of Ms. Find the latest copy in the library’s Browsing Periodicals area on 1st floor (and yes, they even have the 1972 issues!)