Living with Disabilities Through the Power of Rock (and other things)

Posted on March 20, 2013 by David L. Rice Library
In my other blog for Disability Awareness Month, we looked at scholarly material in book chapter form , with lots of facts and data about people around the world living with disabilities. They had some personal stories, but they were often short, and if you want to understand what life is actually like for people with disabilities, I feel like you should read full stories about them. There are great nonfiction and biographical stories out there, but at this library, some of the best accounts are in YA (Young Adult) fiction stories. Go figure. Maybe the reason these stories work so well is that none of them are really all about being disabled. Most of them are more coming-of-age stories that just happen to have main characters who are deaf or have cerebral palsy or something. Others are a bit more…dramatic. Which is the best approach to take? Judge for yourself! 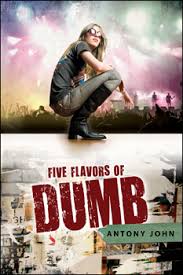 This is a coming-of-age story about a teen girl dealing with school, her family issues, and getting ready for college. She is also the manager of a teenage rock band (it’s set in Seattle, so of course) that she is pretty sure is a total mess. She can’t be 100 % sure though, considering she’s deaf. The book has two major storylines, one with the band (and her attempts to get five vastly different people to come together), and her story with her family, mostly with her troubled brother (who can hear) and her deaf baby sister, for whom her parents get cochlear implants so that she can hear. Oh, and her parents used money from her college fund to do this. Ouch. Our main character, Piper, is a likable protagonist, who is often pulled between the subculture of deaf Americans, and the more mainstream world of rock and roll.  Hardly a tragic victim, she’s a normal girl, with issues and flaws and humor, who just happens to be legally deaf. In fact, most of the book has nothing to do with her disability; it’s more about her relationships with her band and her family. It’s a relatively light story about hearing aids, family, and the power of her music helping a young woman grow up. 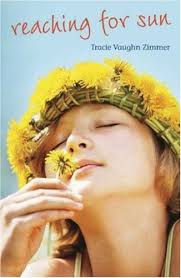 This is less of a traditional story than the last one, mainly because the whole thing is told in poetry. But hold on, don’t let that scare you off! The poems, told in accessible free verse, are used to tell the story of Josie, a 7th grade girl who lives in an aging farmhouse with her grandmother and her well-meaning but nagging mother. She also has cerebral palsy, so she has trouble moving one side of her body, and saying certain words. She has trouble making friends, until she meets a new boy named Jordan, who she becomes friends with. It’s a lyrical sort of book, with the problems Josie has being tied up in metaphors and similes, often linking to gardening or nature, the settings where she feels most comfortable. Like the previous book, it’s not about feeling bad for the main character and her struggles, it’s just about a young girl living her life and trying to figure out her place in the world, while feeling self-conscious about what makes her different.

Stuck in Neutral  by Terry Trueman 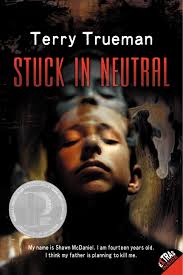 Remember how I said some of these books were more dramatic than the others? This is a big one. It’s told from the perspective of 14-year-old Shawn. He likes music and cars and girls, and is a normal teenage boy. Except one big thing. No one knows he likes these things, because he has very severe cerebral palsy from brain damage at birth, and can’t move, feed himself, or even talk. Everyone thinks that, in his head, he has the intellect of a 3 month old, when in actuality, he is highly intelligent, funny, and even optimistic. Oh, and he thinks that his father might be trying to kill him. Not because he hates him, but because he thinks he is constantly suffering. And there is nothing Shawn can do to stop him. It’s not an easy book, it talks about how families deal with children with severe disabilities, how society in general deals with them, and most of all, euthanasia. Look, I am not going to talk about who is right and who is wrong in this story, or about euthanasia, but man, this book will get to you. It’s a short read, but by the time you get to the last chapter, it packs a huge freaking punch.

The point I am trying to make is that these books might not be true stories, but they very well could be. There are millions of people all around the world right now living with physical and mental disabilities, some extremely severe, others more manageable. Some of them might be into rock music, or gardening, or just imagining. While these are all Young Adult books, they have a lot to say to people of all ages, whether you have experience with disabilities or not.
CP