All my life, I have loved movies. All sorts of them, from comedies to drama, from explosion-heavy action flicks to artsy foreign films, I can find something to like in pretty much any genre imaginable. I also love talking about movies. How the movies we create reflect the culture or place or time period they’re made in. At their best, films can teach us about ourselves and the world we live in, as well as transport us to somewhere else. Seriously, don’t let me corner you at a party; I can go on about films in a cultural and sociological context for hours (stay tuned for my epic post “America, Humanism, and Pop Art in the World of Michael Bay”). Turns out, there are lots of authors out there who love this stuff as much as I do, but they have credentials and talent and stuff. So check out some of these movie books in our Reference section, and see just how important film can be. Or at least, you can keep up with your hipster film major cousin at the next family reunion.

I am not a fan of censorship. Are there movies that I think are disgusting, exploitative, and downright offensive? Oh yeah. But at the same time, people have the right to make them or watch them if they want to. It is a free country after all. And I feel like Forbidden Films backs this up. It details the histories of 125 movies that have been censored for various reasons, and by different people. Some of them, like the infamous Lolita (banned from multiple theaters and given a special SUPER hard R for being a movie about the pseudo- sexual relationship between an old guy and a young girl) are kind of understandable.  However, some of them are just baffling to me. Like, people trying to ban Schindler’s List for being “too disturbing, violent, and sexual”. Yeah, disturbing images in a movie about the Holocaust. Never could have seen that one coming. Or the mass protests by Christian groups about Martin Scorsese’s The Last Temptation of Christ, a controversy that would have made more sense if the protests had happened AFTER anyone saw the movie, and realized half the stuff they were protesting wasn’t even in the film. If this sounds interesting, give this book a try, and make up your own mind. Plenty more great films are mentioned that someone, somewhere, wanted to keep from the rest of us.
The Rock & Roll Film Encyclopedia 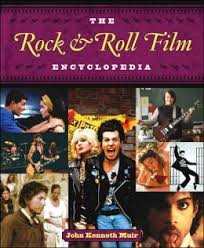 And speaking of people who hate censorship…rock & roll! Yes, movies and music have gone hand in hand for ages. Music in movies has been important ever since they were putting orchestras into silent movie theaters. And eventually, they started to make movies about that crazy new swing the kids are all grooving to: ROCK! This book lists a colorful variety of rock related movies, some about actual rock stars (The Doors, Sid and Nancy), musicals like Hedwig and the Angry Inch and Grease, and movies that have rock as a major element, like The Commitments, and American Graffiti. It gives some information about each film, and talks about the music that each one offers, and it’s a pretty diverse group. It describes classics like The Beatles’ ground breaking Hard Day’s Night, or the infamous Mariah Carey bomb Glitter (which not even the book’s writer can help but snark on); there’s something for everyone here. So if you love both the power of rock and the power of film, turn on your favorite Springsteen song and start reading!

Remember that blog I wrote 100 years ago about adaptations? Turns out, we have a whole reference book about the magical world of book-to-movie adaptations! Where the previous book I described was about fusing music and movies, this is fusing movies with books. Like the other reference books, it lists movies from A to Z, flipping through a number of genres and time periods, as long as they are films that were once books. It came out in 2005, so it’s a bit out of date, but there are still plenty of movies to choose from. Even movies that people forgot were adaptations at all. Did you know The Godfather was a book first? Or Forrest Gump? This book discusses the differences and similarities between a novel and its film adaptation, as well as why certain changes were made in adapting the source material. Like, did you know that when Francis Ford Coppola was making Apocalypse Now, they had to almost entirely redo Marlon Brando’s villain role because he had gained so much weight? There are lots of stories and interesting facts like that in this book to entertain you, especially if you watch most adaptations screaming “WHY WOULD YOU CHANGE THAT?!?!”! Adaptations are not easy, but to learn how Hollywood does them, give this book a look (before it gets its own HBO series).

Like I said at the top, I love movies. And talking about movies. And writing about them. In fact, we have even more reference books about movies that I just didn’t have time to talk about here! There is a lot to say about all these subjects, and if you want to learn more, check these books out. If you love movies, books, music, or other issues surrounding those things, get reading. Or just wait until the film versions come out. With a funky indie soundtrack.