Poetry in the Age of the Internet (Dial up or Facebook)

Posted on April 3, 2013 by David L. Rice Library
For National Poetry Month, let’s consider some poetic arts. I feel that people have a tendency to think of poetry as just old white guys whose writing you were forced to read in high school. Modern poetry is, I think, underappreciated, at least in the mainstream. What do we have to say that wasn’t said by Poe or Whitman? People don’t really get famous for being poets the way they used to (unless you count some writers who do poetry on the side, or songwriters). However, that does not mean there aren’t tons of great poets writing and performing right now, and their work is just as accessible as any “classic” work (more on Twitter than in your English book). So, because I have already done some writing on classic poets, I am going to look at some more 20thand 21st century poetry. And yes, it involves free style. You’re welcome.
The New Young American Poets 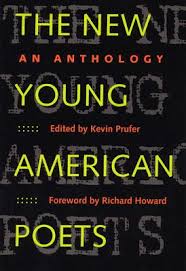 When I look for new poets, I tend to look at anthologies first. They give a good overview of what is going on in the poetic community, and who to look out for. If you like a poem, you can just go find more by the poet. And then do it again! And this anthology of different poets is a great place to start! It ranges from topic to topic, with poems about birth, wars, revolutions, bikes, magic, and laundry. Some have a formal style and tone, while some sound more like something you would hear while drinking overpriced coffee at a poetry slam. The variety of subjects and styles is, to me, what makes this book stand out. Now be warned though: while this says “New” young poets, this was all new the year this book came out, in 2000. A lot has happened since then (they still used Dial Up!) so you won’t see more of the influences of the last ten years or so here. But nonetheless, this is an excellent collection, from a wide variety of excellent writers (even if they were writing in a pre-Facebook world). One more thing- these poets aren’t all old, or white, and they’re sure not all guys!

From Totems to Hip-Hop

Yep, another anthology! This one has more of a focus on diversity and modern (2002) culture than the last one, but has the same range of topics and styles. In the opening of the book the editor, a poetry teacher, laments that his students are not aware of the poetry of minority, modern, or international poets. He wanted to make a book that spoke about modern (for 2002) topics in an interesting way, with many diverse languages. And yes, there is quite a bit here about Hip Hop and spoken word (sort of like poetry said to a rhythm). He compares the poets to the Beatniks of the 1950s and 60s, and includes several copies of their work, although it sounds better out loud. This book has some really interesting stuff, like a poem about a teenager working at a rodeo in Montana, just a few pages away from a pear lamenting that it’s not as romantic as an apple, but has a sweeter taste. Its style and topics are that different. It swings from politics to immigration to the names on mailboxes to laughing in the kitchen with your dad; it has current things, it has classic works, it has everything. See how poetry has covered the whole spectrum of human emotions and experiences, from the 1900s to a post 9/11 world. Really, it’s a collection that has Sylvia Plath, Tupac Shakur, Billy Collins, and T.S. Elliot all in one place. What’s not to like? And free style! Glorious free style. 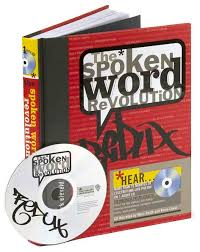 Remember when I talked about Spoken Word poetry (it was a while ago, like a few sentences up) and how it’s like modern Beat poetry?  This book gives even more information on this style of poetry, as well as some of its history and main writers. But more importantly, it has a CD! Reading spoken word poetry is certainly cool, as its focus is frequently emotional, and based around either personal stories or social issues. Or emotional social issues. But the real attraction here is the CD that comes with the book, allowing you to hear the actual words being spoken, not just imagining it in your head. For real, I really like Spoken Word poetry. At its worst, it’s still at least a memorable style. It’s a combination of writing and performance, two things that I very much appreciate. It’s like speaking through song, and the best ones can speak to something pretty profound. Even outside of the coffee house! There is a lot of history to this style, and it covers wacky stories about grocery topics, and quiet meditations on death. A lot of these also deal with the writers trying to figure out if they have anything new to say anymore, a topic I feel like gets explored a lot with modern writers. What has this generation have to say to hasn’t been said 15 times? Give this CD a listen, and find out.

Talking about the state of modern poetry is a pretty big topic for just one blog. Poetry is both less visible than it used to be, thanks to other forms of entertainment like movies and music, and also more accessible, thanks to the internet and the rise of social media and blogs. Now, anyone with an internet connection can get their poetry out to the masses, and there is usually some part of the masses that will want to turn off the TV for two seconds and read it. Think it’s impossible to be a famous, modern poet? Think you have nothing to say? Hey, if the USI library is willing to pay me to ramble on about books all day on the internet, anything is possible.