Posted on April 30, 2013 by David L. Rice Library
The internet seems to have saturated our days and our lives….you can’t go anywhere without checking in on Facebook, Twitter, Instagram, Google, or some other online thing, with Wi-Fi and internet connections everywhere. You can probably find Tweets from deep space at this point, or Snap Chats from the Mole People who live somewhere in the center of the Earth. But a lot of people get rather worried about this increased use of internet and social media. Facebook and Google are under constant scrutiny over privacy issues, with companies being accused of selling their users’ personal information to advertising corporations. Employees are being fired for things they post on social media. People’s information and even their physical locations are constantly being tracked by their own social networking. It’s a brave new world that has such technology in it. And in the race to combat some of these issues, the American Library Association has christened May 1-7 as “Choose Privacy Week”, one during which library users can enter the national discussion about privacy in the digital age. The campaign gives libraries the tools they need to help users make informed decisions about privacy. Now, I am clearly not anti-internet or anti-social media. I write a blog every day! I check my Facebook, Twitter, Snap chat, and Instagram accounts between classes. I probably use Google about seven times a day, 14 if I am writing a paper. Still, it’s important to remember to be careful about these things too. Putting too much of yourself online can be dangerous, and if any companies are getting a lot of power and information about you, it’s best to be aware. Here are some of the library’s titles about online privacy and other tech issues.
Search and Destroy: Why You Can’t Trust Google Inc.  by Scot Cleland 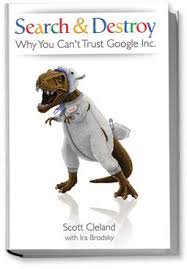 Is it somewhat ironic to use Google to search for a book about why Google is evil? Or is it just sad? Either way, it’s something that author Scot Cleland would certainly want us to consider. This book is pretty much what the title says it is. It’s a heavily researched book about the dark side of our favorite quirky search engine, Google. Beyond the wacky college hijinks of its young creators and staff, its ever present helpfulness in finding anything under (and over and around) the sun, and its awesome seasonal logo changes (Doodles), Cleland feels that Google is actually abusing privacy, infringing basic human rights, and is using its influence to move forward its creators’ political views, and eventually influence the world at large. I am of two minds about this book. On the one hand, Cleland makes a lot of good points. Google isn’t accountable to anyone, it does use A LOT of personal information in rather Big Brother-ish ways, and you could certainly argue that the searches it turns up have an angle. These are points that should really be discussed, and it can be a little scary just how much power this company has. On the other hand…Cleland apparently hates Google so much that he accuses them of trying to remake the world in the image of Google through manipulation, unethical politics, and general evilness. He makes them sound less like a bunch of IT guys and gals creating software, and more like the Legion of Doom creating another world domination plot that the Justice League needs to stop. So if you give this book a look, maybe follow it with something a little more balanced, that doesn’t seem to assume that Google headquarters have pools of lava underneath the floorboards.
Outrageous Invasions  by Robin D. Barnes

This book is less about privacy in our daily lives, and more about the obsession society has with the lives of the rich and famous, and their lack of privacy. The content ranges from court cases to tabloid headlines, talking about the issues of celebrity privacy, when too far is way too far, and why people are so obsessed with the lives of the rich and fabulous. In a time when the lives of ordinary people are out there for the entire world to see, the lives of famous people are often not just an open book, but a 3D pop-up book with graphs and two sequels. Barnes also talks about how this obsession has some rather disturbing implications, especially when it comes to racial issues, religion, and even children. The book also looks at the very nature of privacy, and what it means in the modern era. Just how plugged in to other people’s lives are we, and when is enough going to be enough?
The Offensive Internet  by Saul Levmore and Martha C. Nussbaum 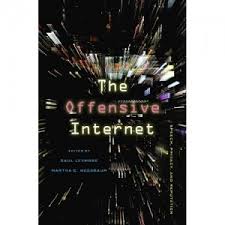 I don’t know if you’re aware of this, but the internet can a bit of a freak show. Just go to YouTube, read the comments, and you’ll see what I’m talking about. Nowadays, the net has something of a reputation for being a gathering place for random racial tirades, angry commenters, and various bits of nastiness. This book is full of essays about the dark side of internet freedom, from misogyny to chat rooms (called the “cyber cess pools”) to privacy issues; it covers all the icky unpleasantness of the internet. The big issue here is the idea of the internet as a market for free speech. It’s great that we have this platform to discuss our views and opinions, but on the other hand, is it also giving stupid, angry people a platform to say whatever they want without consequences? Is it worth it? Should we have more laws to govern the internet? Check out this book, and learn more about combating the online morons and angry Trolls that stalk the net.
The internet has, for better or worse, been one of the major factors in our modern world. Reading these books, it feels like there is a certain fear about the internet. Especially a fear about the loss of privacy and accountability. My opinion? The internet doesn’t have to be a terrifying cess pool of doom where evil corporations steal your information after hacking your email. This doesn’t have to be 1984. Just take the week to really double check your online life, make sure you’re covered on privacy, that you’re being careful what you put online, and above all, be informed. Read books like these, read books that are more positive towards the net, whatever you want, just keep the information flowing. At the end of the day, I think that’s what the internet is supposed to be about.
CP

Like Loading...
This entry was posted in Choose Privacy Week, Internet safety, Outrageous, Search and Destroy: Why you cant trust Google, The Offensive Internet. Bookmark the permalink.