Dirt, Scandal and Biography: The TMZ of Library Science

Our society just loves talking about other people. Especially famous people. Every day as I drive around, I find myself twirling the radio dials only to find countless celebrity gossip reports. I flip around TV, and pass by TMZ and its various knock offs, and news shows where the biggest thing going on in the world is who Taylor Swift is breaking up with (and writing a song about) this week. Want to take a break from the Taylors and the Kardashians and whoever else bloggers wearing big scarves and hipster glasses are raving on about? Have I got a scoop for you! Our library has lots of biographical information and fun facts about both major figures, and less well known, but interesting people. We’ve got juice, gossip, and a whole lot of biographies! Because at TMZ, library style, we get our facts from credible sources and references, not from that drunk busboy in El Paso who swears he saw Nicki Minaj getting secretly married to George Clooney. And what I lack in hipster glasses, I make up for in occasional proper grammar. Scandalous!

Interested in who is considered important in 2012, enough to be added to the annual yearbook of Current Biography? Skip Wikipedia and just come here! CBY chronicles a wide variety of people from around the world who have been judged as influential in 2012. [And this is an annual series, with library holdings as far back as 1943!] If the person being profiled is an author, the yearbook gives not only their biographical information but also tells the reader about their best known books, about the reviews for those books, their influences, and the inevitable movie adaptation. Enough information is given on their personal lives to be interesting, but not so much that it starts to get slightly creepy. If you need up-to-date information about modern writers, artists, athletes, actors, politicians, and other such people, this is the yearbook for you. There are often people you might not have heard of, but when you read their biography, you want to learn more about them. Less Kardashians and more Nobel Prize winners and poet laureates! When you finish the 2012 edition, go back and take a look at some of the other years, and see how much you can find, no matter whether you’re doing research, or you just feel like learning more about the woman who first made a Frappuccino (a hero to us all)- give these books a look! 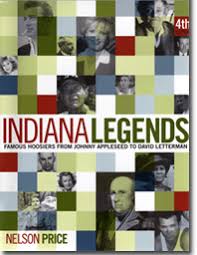 Indiana is not exactly considered the pinnacle of stars and celebrities. We are pretty far from Hollywood out here, in the land of corn and basketball, and you might think that nobody from here would make much of a splash out there. Well, you’d be wrong! Turns out, our celebrity bloggers (OK, it’s a book) have discovered a number of famous Hoosiers in the world, including actors, musicians, politicians, and the occasional crook. For example, did you know that Jim Davis, the guy who created our favorite lasagna loving, snarky cat Garfield, is from Fairmount Indiana, and based Garfield on some of the cats who lived in his barn as a kid? And, in an extra juicy bit of coincidence, Fairmount is also the hometown of silver screen icon James Dean, the poster boy for misunderstood youth in the 50s. His former biology teacher said Dean was “A normal kid I had in school, a normal kid I had in 4-H, who becomes….well who becomes James Dean!” After his tragic death at age 24, he became an icon to angry teens and nervous parents alike, and in Fairmount, he is still fondly remembered. Other Hoosiers to make it big have included President Benjamin Harrison, first female self-made millionaire Madame C.J. Walker, Michael Jackson and all his singing siblings, late show king David Letterman, and Evansville’s own celebrity designer and Bosse H.S. graduate, Halston. Oh, and some skinny basketball guy named Larry Bird. But what does basketball possibly have to do with Indiana? 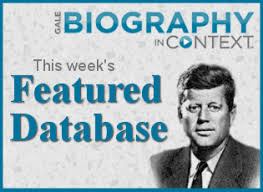 And now we journey to the true gossip hub of the world: the internet! Biography in Context is found in the library’s A-Z list of databases-browse around the site, and check out the various people discussed here. You see lots of categories, with lots of people listed, and a WHOLE lot of facts. Need to know who was an architect? Inventor? World explorer? Just read this with a snarky voice in your head, add a lot of hipsterisms, and you pretty much have any celebrity blog out there, but with a lot of violinists and less former Jersey Shore cast members. Scroll through, and see if you can find some people you know, and some people you should know. It has everyone from Greek poet Homer or actress Jane Lynch, to current president Barack Obama or astronaut Sally Ride, with facts about their lives and histories, but, sadly, little about their favorite clothes. But don’t worry, I’m sure there are websites for that too. Put them all together, and you’ll have a great term paper!

Read all your celeb blogs already, and need some more? Want to learn more about some people who actually haven’t had a reality show, just to shake things up? Try out these biographical sources, whether you want to learn about people because of a project, or you’re just plain interested in knowing facts for the next Trivial Pursuit challenge. And if you want to wear some hipster glasses while doing it, who am I to stop you?

Like Loading...
This entry was posted in Biography, Biography in Context database, Current Biography Yearbook, Indiana Legends. Bookmark the permalink.