Did you know that a Civil War battle was fought in Indiana? It took place on July 9, 1863 in Corydon, only lasted an hour, and was probably not all that important in the overall arc of the war. But it is an interesting part of Indiana history, so let’s peek at it. 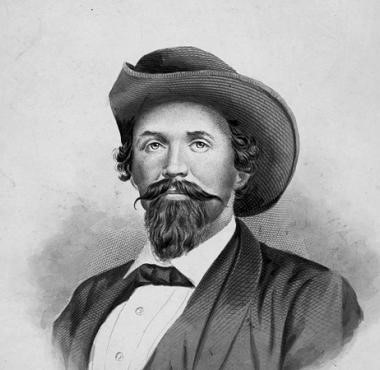 First, the villain of the piece (at least in the eyes of the those in Corydon)—John Hunt Morgan. Morgan was born June 1, 1825 in Huntsville, AL, but moved to his mother’s home state of Kentucky as a child. He served in the Mexican War and upon his return to Kentucky, formed the Lexington Rifles militia company at his own expense.

Remember that Kentucky did not secede and join the Confederacy. Morgan did not share this sentiment, however, and threw himself wholly into the cause, leading his Lexington Rifles to join up with General Simon Bolivar Buckner in Bowling Green. After taking part in the Battle of Shiloh, Morgan was promoted to colonel and attached to a division fighting with the Army of Tennessee.

Morgan, it seems, did not put much stock in that attachment. One source said he had little respect for officers’ decisions. He marched to his own drummer when he, against explicit orders to stay in Kentucky, crossed the Ohio to begin raiding. On July 7, Morgan and some 2000 troops seized 2 steamboats and crossed the river to near Mauckport, IN. “Colonel William J. Irvin of the “Harrison County Home Guard,” with a group of 100 men, positioned a cannon borrowed from the Crawford County Legion near an old farm house at Morvin’s Landing, a few miles east of Mauckport. Two shots were fired, but without much success. Irvin had ordered the men to fire at the boilers of the two boats, but Col. John Timberlake, Provost Marshal, fearing women and children were aboard the boats, countermanded the order and instructed the gunners to fire at Morgan’s troops on the Kentucky shore. It would prove a fatal mistake. The men on the Indiana shore were quickly silenced by Morgan’s parrot guns and retreated into the woods. Their loss was two men, Jeremiah Nance and Lieutenant James H. Current. After the rebels had crossed the river, Morgan ordered both the Alice Dean and John T. McCombs to be burned. Basil Duke, Morgan’s second in command as well as his brother-in-law, interceded, on behalf of Captain Ballard of the John T. McCombs and his boat was spared. The Alice Dean, however, did not fare so well and was put to the torch. All the local people had fled from their homes that night and Morgan’s men made camp for the night.”

During the night the people of Corydon threw up what defenses they could from rails and logs, etc., and sent an urgent appeal to New Albany for its legion to come and provide support. Shortly before noon on the 9th, some 400 men of the Harrison County Home Guard (officially the Sixth Regiment of the Indiana Legion) faced Morgan’s superior forces. Completely outnumbered, the battle was brief, about an hour in duration, before the Home Guard was forced to retreat and surrender the town of Corydon. “Four of the guards were killed, several were wounded, 355 were captured, and the remainder escaped. The victory was not without cost to the Raiders. Eleven Raiders were killed and 40 were wounded. Morgan paroled the prisoners upon entering the town of Corydon. The Raiders began collecting the spoils of victory. Most of the afternoon was spent plundering the stores and collecting ransom money. The Harrison County treasurer was relieved of $690, two leading stores were relieved of $600 each, and contributions of $700 to $1,000 were demanded from the three mills to save them from being burned.”

After wreaking havoc in Corydon, the Morgan’s raiders continued north to New Salisbury and Salem. “For three weeks Morgan terrorized the local defenses of southern Indiana and Ohio before he was captured at Salineville by Union cavalry under Gen. Edward H. Hobson and sent to the Ohio State Penitentiary in Columbus. Incredibly, on November 26, 1863, the same day Gen. Patrick Cleburne was doggedly defending Ringgold Gap in northern Georgia, Morgan escaped from prison and made his way back into Confederate lines. Morgan was appointed head of the Dept. of Southwestern Virginia in April, 1864, and determined to attack Knoxville, Tennessee, a city with a largely pro-Union citizenry. While bivouacked in Greeneville, Tennessee on September 3, Morgan was caught in a surprise attack and shot and killed by a Union private who had once served under him.”

Corydon/Harrison County maintain a small 5-acre Corydon Battle Park to mark the site of the battle. A period cabin, cannon, and plaques tell the story.

The Confederate dead from the Battle of Corydon are buried in Cedar Hill Cemetery. John Hunt Morgan is buried in Lexington. 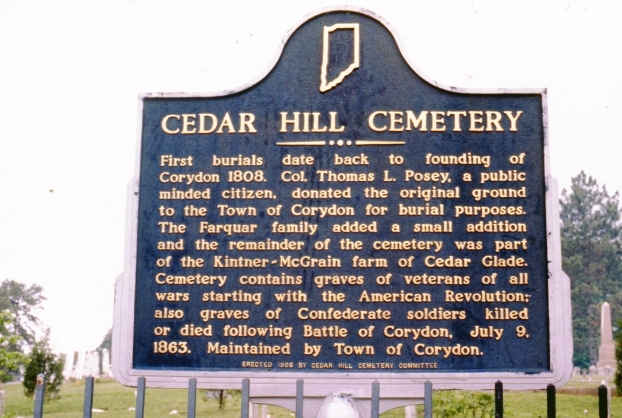 It may have only lasted an hour and could be “much ado about nothing,” but to those who lived through the Battle of Corydon, it certainly was a big deal. Not all history has to be monumental!

It may have only lasted an hour (watch a reenactment) and could be “much ado about nothing,” but to those who lived through the Battle of Corydon, it certainly was a big deal. Not all history has to be monumental!