The Greatest Show on Earth

Most of us have at some time thrilled to the delights of the circus…the animals, the daring acts, the so-much-going-on-at-one-time-it’s-overwhelming fun of it all.  As early as 1300-1200 BCE, there is artistic evidence of acrobatic performances, and in ancient Rome, jugglers and acrobats exhibited their talents during the interludes between chariot races or gladiatorial fights.  No worries, we’re not going to go back that far into history here, but rather hit the highlights of the circus during 19th and 20th century America.

P.T. (Phineas Taylor) Barnum was “born in Bethel, Connecticut, in 1810, the son of a local innkeeper and shopkeeper. After a string of unsuccessful jobs and business exploits, the young Barnum turned his attention to a career in showmanship.”

Barnum was a promoter—he excelled at marketing, at showmanship, at giving the people what they wanted.  Contrary to popular belief, he never said there’s a sucker born every minute.  “For his part, Barnum always maintained that his patrons were not “suckers” but willing participants in his lighthearted pranks and hoaxes. “The people like to be humbugged,” he once said.””

What Barnum was not was the loveable con man depicted in the recent Hugh Jackman movie, The Greatest Showman—at least, not entirely.  Barnum was a complicated man.  Several of his promotions were despicable in the sense of being exploitative and racially insensitive.  On the other hand, he was also part of the temperance movement, a philanthropist who gave generously to children’s hospitals, and later became passionately pro-abolition.  You can use the resources listed at the end of this article to get a fuller picture, but in the meantime, let’s get back to the circus.

In 1841 Barnum acquired a museum in New York City and used it to exhibit “500,000 natural and artificial curiosities from every corner of the globe.”  This burned to the ground in 1868, but within 2 years he signed a partnership with William Cameron Coup and Dan Castello, who wanted to expand their circus and needed Barnum’s money, name, and expertise in publicity.  “In April 1871 the P.T. Barnum Museum, Menagerie and Circus, International Zoological Garden, Polytechnic and Hippodrome played for a week in Brooklyn, and then proceeded on through New York state and New England. For the price of a single ticket, viewers made their way through several tents containing a menagerie and the kind of exhibitions that Barnum had featured at his American Museum….. At the end of the series of tents, the audience took their seats under the big top for a performance of equestrians, clowns and acrobats. Everywhere it opened, the show was a huge success, turning away scores of potential viewers, and Barnum returned bursting with ideas for expanding and improving.” (Simon, p. 76-77)

Barnum and his partners were also instrumental in improvements in circus transportation. The 1871 show traveled in 100 wagons. “Any wagon show was vulnerable to weather, and the slow pace of travel meant that the circus needed to stop frequently in small towns, unloading, setting up tents and taking everything down every evening.  It was expensive and often grueling. The entire show bumped along rutted roads night after night, damaging wagons and keeping performers awake.  [By this time, a uniform rail gauge had been established, thus making transportation by rail a better option, but railroad cars were not designed for the variety of shapes and sizes of items that a circus needed.  Barnum’s idea was to have specially made circus train cars.  They could travel hundreds of miles overnight and arrive in a new venue in the morning.]  In its first season on rails, travelling on 65 cars as far as Topeka, Kansas, the show opened in 145 different cities and offered three performances a day.” (Simon, p. 77-78)

Given their incredible popularity, circuses frequently had to turn away paying customers.  Just making the ring larger to add seats was not successful as viewers could no longer see the performances well.  In 1872, Barnum added a 2nd ring to P.T. Barnum’s Great Traveling Exposition and World’s Fair, Menagerie, Caravan, Hippodrome, Polytechnic Institute, National Portrait Gallery, Hall of Classic Statuary, Mechanics, and Fine Arts, Garden of Zoology and Ornithology, now simply billed as the Greatest Show on Earth.

In 1880, Barnum quit his partnership with Coup and Castello and took on as a new partner the owner of the Great London Circus, James Anthony Bailey.  By all accounts, Bailey was almost the polar opposite of Barnum—he was quiet, behind-the-scenes, a manager of every detail. Each man was a genius in his own arena, and the partnership thrived.  The newly minted Barnum & Bailey Circus grew to fill three rings of entertainment.

We now need to step back in time a bit to see the origins of the final partners in this extravaganza. In 1847, a 21-year old harness maker from Germany named August Rüngeling came to this country.  He eventually married, Anglicized his name to Ringling, settled (more or less) in Baraboo, WI, and had 8 sons (one of whom died at birth or was stillborn) and 1 daughter.  In 1870, the family, then living in Iowa, had the opportunity to see Dan Rice’s circus, and the die was cast.  The brothers, particularly 18-year-old Albert (Al) were enthralled and immediately set about learning tricks and putting on performances in their backyard.  Even as they grew up and moved to Baraboo in 1875, the level of enthusiasm remained high. In June 1882 they put together another show, the Ringling Brothers Classic and Comic Concert Company, and took it on the road throughout the Midwest. 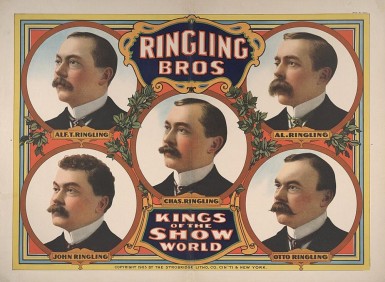 “For a good many years, every dollar any of the brothers could squeeze out, beyond those needed for the most moderate personal expenses, went into a common purse. They all had a true dedication to the job at hand, and an ambitious foresightedness that kept them always trying to save enough to amplify the program, and add to the performers, stock, and equipment.  The growth was phenomenal.  By 1888 they were able to buy two elephants. At the end of 1889, they went on the railroad…..By 1890, not one of the seven was taking part as a performer.” (Murray, p. 273)

P.T. Barnum died in April 1891, but the Barnum & Bailey Circus continued to thrive under Bailey’s leadership.  In 1897 it embarked on a 6-year tour of Europe. By the time it returned in 1903, the Ringling brothers had established their circus as pre-eminent as “Kings of the Show World.”  In 1906, Bailey passed away and his widow sold his interest in another circus to the Ringlings, who in 1907 also acquired Barnum & Bailey.  For the next 11 years they operated the circuses separately, but in 1918 they united them and the behemoth that became Ringling Bros. Barnum & Bailey Circus was born.  By 1925 it had become, according to circus historian Mark St. Leon, “a moving township of sixteen hundred people that travelled on four special trains of one hundred cars each, many of the cars twenty metres long. The big show carried nearly eight hundred horses and nearly one thousand other animals, including forty-two elephants, giraffes, camels, and all sorts of other beasts rarely seen in America outside a zoo…There were three rings and two stages and these were worked almost continuously throughout the two-and-a-half hour program. No act was allowed more than five minutes, save a few centre ring star acts…and there was not a second’s delay from the time the big parade took place around the hippodrome track that surrounded the three rings until the final chariot race.  One hundred clowns worked the hippodrome track continuously while the acts were in progress.” (Simon, p. 91) 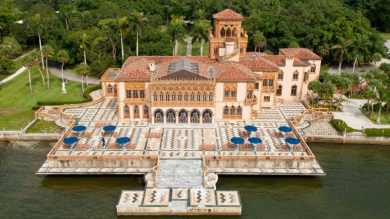 As time went on, the Ringling brothers began to pass away until, in 1926, John was the sole surviving brother. John proved himself a very capable administrator.  “As the years went by, he became for the public the embodiment of the circus, an international figure recognized immediately by thousands when he appeared in any city here or in Europe.” (Murray, p. 78) He dressed rather modestly, but he did enjoy fine living.  He and his wife, Mable, entertained lavishly at their Sarasota home, Ca’d’Zan (house of John).  He collected art, amassing so much that a separate museum on the estate was needed to house it.

The last years of John Ringling’s life were not happy.  In 1929 he overextended himself in purchasing the American Circus Corporation, and then the Depression struck.  His beloved wife, Mable, died and he was in poor health.  He struggled to retain his empire, and at his death in 1936, left his estate in such disarray that it took 10 years to settle.  Eventually, the Ringling mantle fell on the shoulders of John Ringling North, son of the lone Ringling sister, who held it until 1967 when the family sold the circus.

Fast forward to 2017–the Ringling Bros. Circus, now owned by Feld Entertainment, folded after 146 years, due to a combination of factors: high operating costs, declining sales, and animal rights protests.  An era had ended, yet circuses today, while not as popular in their heyday, still entertain and delight children of all ages.  Evansville has a long history with the Hadi Shrine Circus.  Beginning in 1933, the Hadi Shriners have been bringing the circus to town over the Thanksgiving holiday.  The show is new each year as Hadi Shriners contract with individual acts rather than a full production.  This year’s Hadi Shrine Circus will be held at the Ford Center November 28-December 1.

Humbug? Showmanship? Good clean fun? Exploitation?  The answer is probably yes to each, in differing proportions for each circus-goer.  For now, have a relaxing Thanksgiving holiday—maybe even visit the Shrine circus—and in the meantime, enjoy this selection of circus photographs from University Archives Special Collections.

When circuses came to town, there was usually a parade through the streets out to the fairgrounds, to get people excited to see the show. Here elephants from the Cole Brothers Circus approach the circus grounds in New Harmony in 1909.

Woman balancing on her head on a trapeze, holding a ring on each arm and leg.

Circus elephants at Hadi Shrine Circus at Roberts Stadium, in the 1970s

During the first half of the 20th century, Evansville was home to Karl Kae Knecht, one of the premier editorial cartoonists of the time. He worked for the Evansville Courier from 1906-1960; for most of that time, his cartoons appeared seven days a week on the front page until 1954 when they were moved to the editorial page. He was a huge circus fan, and especially loved elephants. Here he is in 1920, holding the trunk of a Ringling Brothers Circus elephant.

In his May 13, 1909 diary entry, Knecht noted that the Barnum and Bailey Circus came to town. 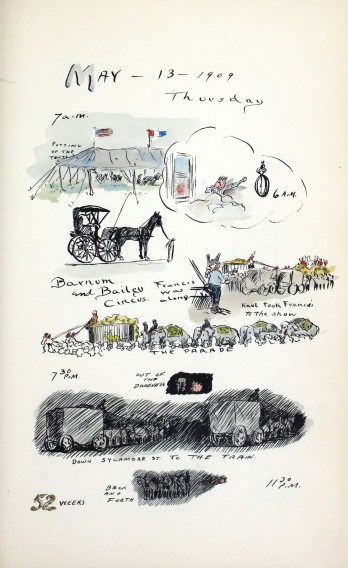 Audrey W.  The History of Circuses in America.  Arcadia Publishing and the History Press online, 2019.

Flatley, Helen. “The Darker Side of how P.T. Barnum Became “The Greatest Showman.”’ January 6, 2019: thevintagenews.com