*Post written by Jennifer Greene, Archives and Reference Librarian at the University Archives and Special Collections.

After decades of debate and delays, 4 out of the 6 sections of I-69 from Evansville to Indianapolis are finally open for business.  Sections 1-3 from Evansville to Crane Naval Surface Warfare Center opened a little over three years ago: now, section 4 is open all the way to Bloomington.  State Road 37 is currently being upgraded to interstate quality; however, the route from Martinsville to Indianapolis is still being debated.  If you want to see the original routes and plans for the entire I-69 project, the archives has the publication produced by the State on Indiana in 2003.  These include the environmental and economic impact statements as well as maps and past proposed routes.  To get the latest news on the new interstate, check out the I-69 website developed by the State of Indiana, http://www.in.gov/indot/projects/i69/ . 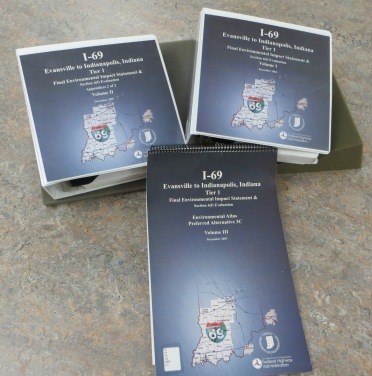 Like Loading...
This entry was posted in Evansville, Indiana and tagged #amUSIngArtifacts, Interstate 69, Southern Indiana. Bookmark the permalink.