Behind the Music: Edison Phonograph Spools 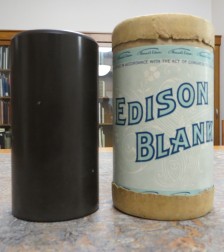 There were early prototypes of the phonographs around 1857; however, Thomas Edison is credited to inventing the phonograph in 1877 (The Editors of Encyclopædia Britannica, 2010). His phonograph used various materials such as paraffin paper, tin foil, and different types of wax (i.e. – ceresin, beeswax, stearic, and “brown”). On October 8, 1887, the Edison Phonograph Company was created in order to promote his phonograph machine and wax cylinders (“History of the Cylinder Phonograph,” 2017).

History of the Cylinder Phonograph – Inventing Entertainment: The Early Motion Pictures and Sound Recordings of the Edison Companies. (2017). Retrieved January 16, 2017, from https://www.loc.gov/collections/edison-company-motion-pictures-and-sound-recordings/articles-and-essays/history-of-edison-sound-recordings/history-of-the-cylinder-phonograph/