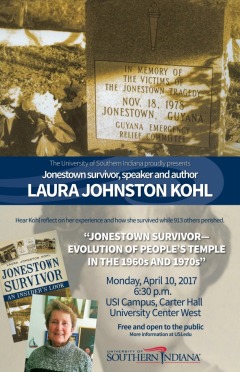 In part two of our series, “Follow the Leader: Jim Jones and Jonestown”, we are going to examine what occurred at Jonestown and the repercussion from the event in American history.

As reminder, Laura Johnston Kohl is going to speak this evening at 6:30 PM in Carter Hall. This is a free event!

Upon various allegations and controversies surrounding Jim Jones, he and his followers’ left San Francisco in the 1970’s. They moved to Guyana in South America to create their agricultural utopia, Jonestown. The reason they moved to Guyana was that it was a former British colony and was the only South American country who spoke English. (History.com Staff, 2010). 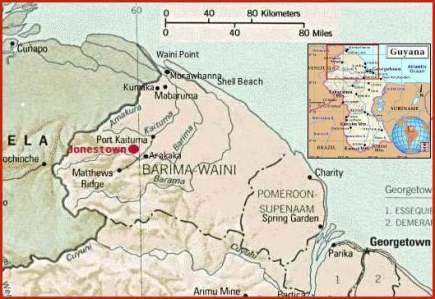 Jonestown was situated on the Orinoco River Basin in Western Guyana. They had close to four thousand acres of land to lease under the rule to “cultivate and beneficially occupy” the land. Due to their location, they were self-sustaining because of the abundance of fruit, vegetables, and livestock (San Diego State University, 2014). By 1977, there were over one thousand members living in Jonestown. The members were under strict rules and regulations by Jones. According to History.com (2010), the members were subjected to the following:

Jones started having mental health issues and formed an addiction to drugs. Jones’ mannerisms started to change: he built himself a throne and considered himself on an equal level to Vladimir Lenin, former leader of the Soviet Union, and Jesus Christ, and had members train for mock suicide drills (History.com Staff, 2010). 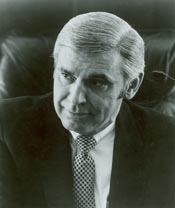 Rep. Leo Ryan (Photograph taken from the Collection of the U.S. House of Representatives)

Back in the United States, there was an interest in what was occurring in Jonestown. United States Representative, Leo Ryan, of California, received word some of his constituents that their family members were “… being held against their will at Jonestown and decided to go there to investigate” (History.com Staff, 2010). Ryan travelled to Jonestown, Guyana in November 1978 and visited the facility on the 17th. On November 18, as Ryan was leaving, other Jonestown members wanted to escape; however, some of Jones’ members followed Ryan and the other members to an airstrip in Port Kaituma and attacked them, leaving Ryan and eighteen others dead (The Editors of Encyclopædia Britannica, 2016).

Once Jones received word about the attack on Representative Ryan, he ordered the members to commit suicide. How? They handed out cyanide-laced drinks; however, that was only for the adults. Babies and children were the first victims: adult members gave them the deadly drink. The numbers varies based on the sources but there were over nine hundred members perished. Jim Jones did not die from cyanide poisoning: he committed suicide (The Editors of Encyclopædia Britannica, 2016). 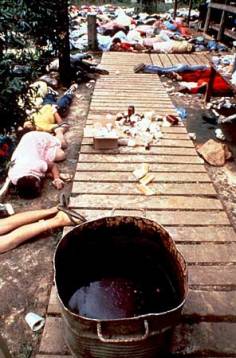 There were less than one hundred survivors from Jonestown, including Laura Johnston Kohl. After the massacre, the Peoples Temple disbanded and went broke; meanwhile, Jonestown was abandoned (The Editors of Encyclopædia Britannica, 2016). Larry Layton was the only individual charged from the Jonestown Massacre. In Guyana, he was acquitted of murder; however, in the United States, he was tried and convicted of conspiracy of murder on Rep. Leo Ryan and served eighteen years in prison (San Diego State University, 2013)

In the end, “Jonestown was the greatest single loss of American civilian life in a non-natural disaster” until the September 11 Attacks in 2001 (Rapaport, 2003).