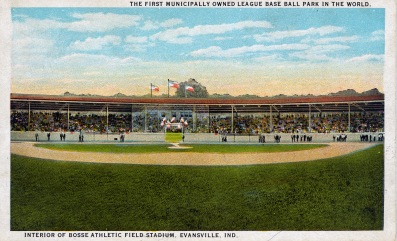 Baseball’s moniker is known as “America’s pastime”. Some could make the same conclusions for Evansville. Evansville is the home of Bosse Field. For over a hundred years, history and memories have been created there.

This is the current team logo of the Evansville Otters.

Bosse Field is a major sports attraction in Evansville. Did you know that Bosse Field is the third oldest baseball stadiums in the United States? It is because it opened on 1915; however, Fenway Park (1912) and Wrigley Field (1914) are older than Bosse Field. The stadium was named for Evansville mayor, Benjamin Bosse, who was the mayor as Bosse Field opened. It cost $65,000 and tickets ranged from 25 to 75 cents (Goldberg-Strassler, 2012). 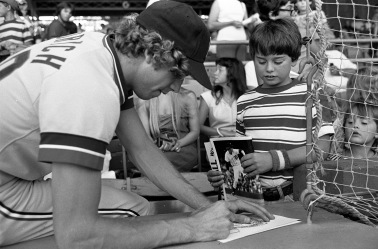 People at Bosse Field with the Evansville Triplets and Mark Fidrych of the Detroit Tigers, 1977. Credit: University Archives & Special Collections