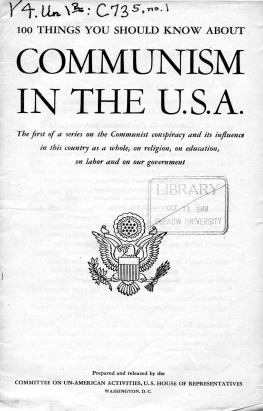 Pamphlet over “Communism in the USA”, 1948. Credit: University Archives and Special Collections

Throughout most of the twentieth century, there was an invisible war between democracy and communism. The most noticeable occurrence was between the United States and the Soviet Union. There were at odds with each other because of their political system. Numerous U.S. Presidents denounced communism in speeches such as John F. Kennedy in 1963 with his “Ich bin ein Berliner” and Ronald Reagan in 1987 with his speech to Mikhail Gorbachev to “… tear down this wall” (Rafferty, 2017). Even before their famous speeches, there was one organization in the United States that “ensured” the safety of democracy in the country from communists.

The establishment of the House Un-American Activities Committee, or HUAC, occurred in 1938. HUAC was a committee in the U.S. House of Representatives. The main purpose was to investigate individuals with “… alleged communist activities” (Editors of Encyclopædia Britannica, n.d.). The committee was involved in numerous high profiled cases, most notably, against Alger Hiss in 1948. Hiss, a then Department of State official, was charged with perjury after accusations surfaced that Hiss worked as a Soviet spy. The committee “… served as a blueprint for the tactics employed by U.S. Senator Joseph McCarthy in the early 1950’s” (History.com Staff, 2009). The power of the committee slowed and it finally dissolved in 1975, as the Internal Security Committee (Editors of Encyclopædia Britannica, n.d.).

The committee published numerous pamphlets over the effects of communism over various institutions in the United States. The numerous throughout this post are owned by the University Archives and Special Collections. If you are interested in seeing the pamphlet or requesting in a copy, please contact the archive at archives.rice@usi.edu or visit during normal business hours.