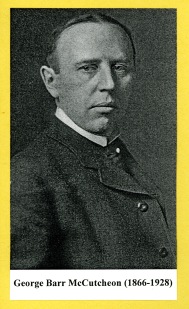 Moving along in “Hoosier Authors”, we have focused on children’s literature and basic fiction novels. Today, we continue our focus in fiction literature with author, George Barr McCutcheon.

George McCutcheon was born on July 26, 1866, near Lafayette, Indiana. Growing up, he frequently drew pictures; moreover, his brother, John, taught him proper drawing techniques. John later became a prominent newspaper cartoonist while George attended Purdue University, and soon after, worked for as a newspaper reporter and then city editor for the Lafayette Daily Courier (1893-1901).

After leaving his job, George began to write novels. His first novel, Graustark: The Story of a Love behind a Throne (1901) served as a catalyst to his success and was made it into a successful book series.  These novels sent reader’s over to Eastern Europe and to fictional royal courts using chivalric romance to entwine the series together. He later published five more novels in the Graustark series. Brewster’s Millions (1902) was his other successful novel and both have film adaptations: Graustark was produced three times in the 1920’s and Brewster’s Millions became a Broadway play and was produced as a film six times from 1914 to 1985.  George McCutcheon passed away on October 23, 1928 (Editors of Encyclopedia Britannica, 2015).