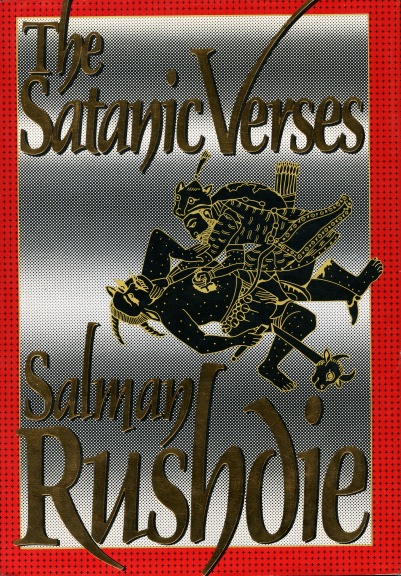 Book cover of “The Satanic Verses” by Salman Rushdie, 1989.

The Satanic Verses was published in 1988 by author Salman Rushdie, and has had a tumultuous history riddled with violence, accommodation, and censorship. Most commonly referred to as the “Rushdie Affair,” the time immediately succeeding the book’s publication saw many in the Muslim community incensed with rage towards what they believed to be a slandering of their religion, and many called for the book’s withdrawal.

When the book was published a few month later in the United States, Ayatollah Khomeini, then the Supreme Leader of Iran, issued a fatwah declaring that it was the duty of any Muslim capable to end the life of Rushdie, based on grounds of he being a blasphemer of the Muslim faith. Though attacks were made against Rushdie, he was never injured. The same cannot be said of his Japanese translator, Hitoshi Igarashi, who was stabbed to death over his part in the book’s Japanese publication. The Italian translator, Ettore Capriolo, was also stabbed, though not killed.

The book has been censored in many countries and places of learning world-wide; some territories sensor it due to religious beliefs, while others do so to mitigate any threat the book might cause, not viewing the book’s presence as not worth the trouble. Regardless, The Satanic Verses provide an example of banned media brought upon by fear and discontent.