Mt. Rushmore: Monument For The Ages

Mount Rushmore, one of America’s most treasured national landmarks, is located at the Harney National Forest in Keystone, South Dakota. Construction began on October 4, 1927 and ended on October 31, 1941 after 14 years of grueling conditions that saw sculptors work under extreme temperatures and dangerous heights. 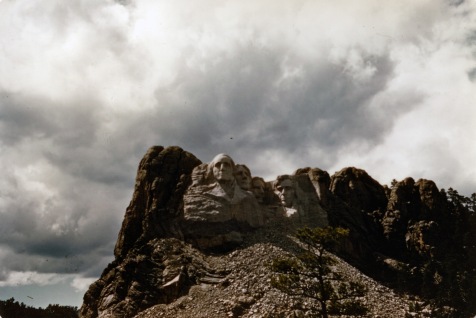 The landmark itself features the visages of four United States presidents on the face of a cliff overlooking the Black Hills. The four presidents, from left to right, are George Washington, Thomas Jefferson, Theodore Roosevelt, and Abraham Lincoln. Each of these presidents were chosen for a specific reason, as the sculptor who created Mount Rushmore, Gutzon Borglum, believed that they each represented a quality that was inherent to the spirit of America. Washington, widely regarded as the father of America, was an obvious choice to represent the nation’s creation. Jefferson, who wrote large portions of the Declaration of Independence and bought the Louisiana Territory, represented America’s growth. Theodore Roosevelt led the nation economic growth and initiated the construction of the Panama Canal, so he was included to represent the nation’s development. Finally, Abraham Lincoln worked tirelessly to preserve the union and to abolish slavery during the Civil War, and was included to serve as a symbol for America’s preservation.

An unimplemented idea for Mount Rushmore was the Hall of Records. Initially devised as an engraved tablet along the face of the cliff next to the busts of the presidents, Borglum thought that it was important to document the major events of the nation in order to lend significance to the sculpture itself. After the tablet was deemed unfeasible, the idea changed into a hall situated behind the sculpture that would house a description of the major events of the nation as well as replicas of important historical documents. The hall eventually ceased construction so that focus could be placed exclusively on the sculptures.

The park includes tours and other attractions for visitors. Many flora and fauna call the areas surrounding Mount Rushmore their home and can be spotted from various locations around the park.

The University Archives and Special Collections has a variety of images and photos taken during vacations and other travels. These include locations similar to Mount Rushmore, as well as other manmade structures and natural landmarks throughout the United States, Europe, and the rest of the world.