In 1975, an air-conditioned, twenty-six car train made its way on a journey of a lifetime. More than 7 million Americans visited the train during its tour throughout 48 states and 138 cities. Tens of Millions would stand trackside just to catch a glimpse of the extravagant American Freedom Train. The locomotive had twelve display cars filled with over 500 artifacts from around the world. You may ask who would be the one to come up with such an idea. Ross Rowland Jr did, Rowland who was a New York commodities broker and a team of corporate sponsors brought the American’s Bicentennial Celebration to the people. By the time the corporate sponsors signed on to help Rowland with the restoration there was barely enough time to build the train, but they finally pulled it together just in time. The train cars were restored in 30 days, which was led by Doyle McCarmack, at a site called Cameron Station, Virginia and were essentially converted into environmentally controlled, fireproof, rolling museums.

The military reservation in Virginia was the ideal place for the restoration to take place; it was safe, secure, and close to the artifacts and institutions that the artifacts were coming from. The steam engine locomotive opened to a sellout crowd of 40,000 people at Delaware Park. The journey started at 8 AM, Tuesday April 1, 1975 in Wilmington, Delaware. The American Freedom Train would travel the country until December 31, 1976. The museum on wheels was made of 12 display cars. Visitors would go through by a moving sidewalk that would make the process go faster because no individuals could stop or go backwards. An estimated 1,800 visitors could tour the train each hour. Two cars held large objects that were viewed from the ground through showcase windows. Some of the artifacts that the American Freedom Train held were George Washington’s copy of the constitution, the original Louisiana Purchase, Judy Garland’s dress from the Wizard of Oz, Joe Frazier’s boxing trunks. Martin Luther King’s pulpit and robes, a rock from the moon, Civil War artifacts, astronaut Alan Shepard’s Apollo space suit, and Benjamin Franklin’s handwritten draft of the Articles of Confederation. 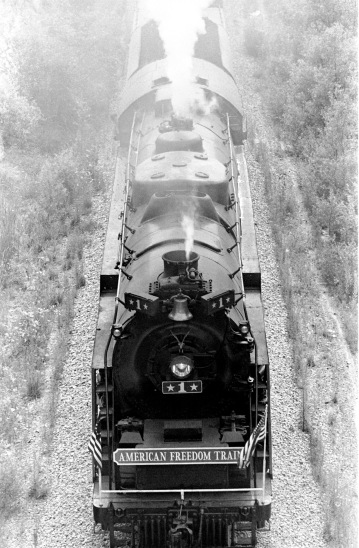 Looking down on the American Freedom Train, steaming down the tracks, 1976. Source: Gregory Smith Collection, MSS 034-0604.