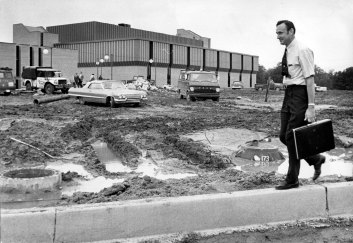 Dr. David L. Rice walking in front of the construction of the Science Center, 1969. Source: University Archives and Special Collections, UP 00484.

Over fifty years, the University of Southern Indiana has been a beacon of light onto the city of Evansville since its conception in 1965. Three wonderful individuals guided the University into future. Those three individuals were Dr. David L. Rice, Dr. H. Ray Hoops, and Dr. Linda Bennett. In a special three part series, “Passing the Torch”, we honor the legacy of USI’s three presidents.

Long before the creation of Indiana State University-Evansville, David L. Rice began his academic career at Purdue University. From there, he received his bachelor, master, and doctor of philosophy degrees. He started at Ball State University, as a faculty member and director of research. He served with the Cooperative Education Research Laboratory and Bureau of Research at the U.S. Office of Education. In 1967, Indiana State University-Evansville, he became the dean to oversee the university. He would not become president of ISUE until 1971 (USI Web Services, 2018).

During his twenty-seven tenure, Dr. Rice oversaw the growth of ISUE, independence movement from Indiana State University as a separate institution, creation of numerous bachelor and master’s degrees and expansion the curriculum, and becoming a “public university accessible and affordable” (Office of the President, 2018; USI Web Services, 2018). Dr. Rice announced his retirement on March 3, 1993: Rolland Eckels stated, “David Rice is a classic example of the right person in the right place at the right time. He came in 1967 and very effectively acted as a shepherd to the embryonic campus. He has quietly and effectively done a superb job of familiarizing the legislature with the importance of USI to the educational development of Southern Indiana” (Anderson, 1993).

At the University Archives and Special Collections, we house the personal collection of the USI President’s collection (UA 001). For more information on the Rice presidency, check out the Rice Library Online Digital Collection and look through past editions of The Shield newspaper and other university publications.

Office of the president, USI. (2018). Former presidents. Retrieved from https://www.usi.edu/president/former-presidents/