Remembering the Past through Postcards

By now, any summer vacation you took is perhaps just a distant memory.  If you happened to purchase or send any postcards, you may be able to jog your memory about those fun times.  Although people do not send postcards as they once did, there was a time when they were all the rage.  In 1926, 206,000,000 were mailed.  By 1997, the peak year, that number had skyrocketed to 3,003,755,000.  As their popularity waned, the 2017 figure dropped to 670,952,000.  Let us look at the history of postcards, and then enjoy a sampling of some of the different ones in Rice Library’s University Archives collections.

Postcards were not even a thing until the middle 1800s.  Circa 1848-1870, people could mail cards in envelopes with pictures on them, leading some to speculate that these were the forerunner of postcards.   “On February 27, 1861, the US Congress passed an act that allowed privately printed cards, weighing one ounce or under, to be sent in the mail. That same year John P. Charlton (other places seen as Carlton) copyrighted the first postcard in America.”

Timing, as they say, is everything.  Charlton had the misfortune to have the Civil War intervene, and it is believed that none of his cards was ever sent.  In 1870, a man named Hyman L. Lipman reissued Charlton’s cards as Lipman’s Postal Cards.  “The earliest known postmark on these cards is of October 25, 1870 from Richmond, Indiana. … It was the first authorized illustrated postcard to be sent though the United States mail….”  As it turns out, Lipman’s timing wasn’t all that good, either.  In 1873 the government began to produce its own postcards, the only ones legally allowed to bear the words “Postal Card.”  It was still possible for private printers like Lipman to produce and distribute cards, but these cost $.02 to mail as opposed to $.01 for government cards.

Pressure from their growing popularity eventually moved the field to more equitable grounds.  “Starting in 1898, American publishers were expanding postcard printing services and were allowed to print and sell postcards bearing the inscription, “Private Mailing Card, Authorized by Act of Congress on May 19, 1898”. These private mailing cards were to be posted with one cent stamps (the same rate as USA government postcards).” In 1901, progress continued when it became no longer necessary to print the above inscription.  The entire back of the card was reserved strictly for the address, with no other text permitted, thus 1901-1907 was known as the “Undivided Back” period.  Below are some examples from MSS 010 Postcard Collection in which the sender wrote across the picture in order to get around this restriction.

Probably the biggest improvement came in 1907, when the backs of postcards were divided, with space for a message and space for the address.  This issued in what some refer to as the “Golden Age” of postcards, with popularity soaring.  Postcard collecting became a popular hobby, too.  “Deltiology is the formal name in the USA for postcard collecting, and remains the third largest collectable hobby in the world. It is surpassed only by coin and stamp collecting. [Baseball/sports card collecting is limited to the USA and isn’t really popular overseas.]”

The 15 years from 1915 to 1930 saw a decline in both quality and popularity.  Many early postcards were printed in Germany, but with WWI underway, German postcards weren’t available in the U.S., so American printers took over.  “American printers did not have the same technology as German printers, so the quality of available postcards fell, and people lost interest in collecting them, effectively ending the “Golden Age” of postcards. Printers saved ink during this time by not printing to the edge of the card and leaving a white border around the image, giving the time period its name.  Postcards from the White Border Period also had a description of the image on the message side, which retained the divided back.”  The postcard below contains military themes and was mailed in 1918 from Cincinnati. It was from a soldier by the name of John S. Ruston, mailed to his family in Inglefield, IN.

“Beginning in the 1930s, new printing processes allowed printers to produce postcards with high rag content, which gave them a look of being printed on linen, rather than paper. The most notable printer of this period was Curt Teich & Co., which printed its first linen card in 1931, and whose postcards became popular around the world.”  A common theme for the linen cards was the growth of America’s highways, as seen here.  This particular postcard was mailed in 1943. 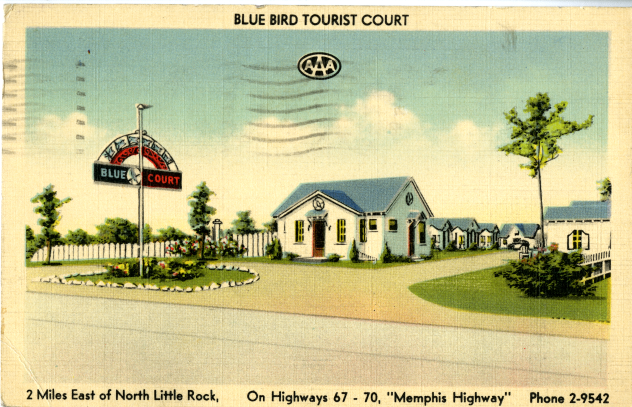 Postcards can tell us a lot about ourselves.  They can document history.

That history is not always pleasant.  This early card reveals racial attitudes that may have been prevalent at the time but today are seen as abhorrent. Postcards were also used for birthday and holiday greetings.  Look at the variety shown here.

The grapes on the Thanksgiving card are actually fabric that is cut out and glued on the card.

The most popular category of holiday cards were those sent for Christmas.  “The practice of sending Christmas cards pre-dated the broader postcard craze by several decades, largely thanks to the efforts of Louis Prang. Prang was a savvy printing entrepreneur who kept adding products and lithographic techniques to his ever-expanding business, including the introduction of Christmas greeting cards (perhaps at his wife’s suggestion) in 1875.  By the 1880s he was publishing more than 5 million holiday cards each year.”  Note that this card includes illustrations of Spring flowers, something you would not likely find on any contemporary Christmas card.

Other of our digital collections also contain postcards, including the Roy Kennedy collection, MSS 256.  This collection contains images of U.S. involvement in WWI, including a series of postcards produced by the YMCA.   Today we think of the YMCA as a place that has a pool and gym facilities, but this is not the whole story.

“YMCA prisoner-of-war work –which was to be undertaken on a massive scale in the following century’s two world wars — began during the Civil War, with the YMCA ministering to the needs of Confederate soldiers imprisoned in the north and Union soldiers in the south.   Journals record that the YMCA through the U. S. Christian Commission distributed some 100,000 cases of food, clothing and medical supplies, and a total of 12 million books, magazines and pamphlets. Volunteer “delegates” wrote an estimated 90,000 letters for the sick and wounded, and distributed $1000 a week in postage for troop correspondence.  … The tradition of serving the troops beyond the nation’s borders began during the Spanish-American War, when YMCA staff and volunteers were dispatched to Cuba, Puerto Rico and the Philippines. YMCA supplies, including medicine and office materials, reached Cuba before the army’s own supplies; and early dispatches from Teddy Roosevelt’s Rough Riders were written on YMCA stationery. …  At the beginning of the Great War would task the YMCA with enormous responsibilities.  In the years before that war, the YMCA had developed mobile canteens and recreational facilities and had broad expertise in service to the armed forces. It was an expertise that would soon blossom into a massive program of morale and welfare services for the military on the home front and particularly overseas.  When war was declared in 1917, the YMCA immediately volunteered its support, and President Woodrow Wilson quickly accepted it. The YMCA assumed military responsibilities on a scale that had never been attempted by a nonprofit, community-based organization in the history of our nation and would never be matched again.”

This massive hotel in Koblenz, Germany (Coblenz is an earlier spelling) was built 1912-1913.

The Ehrenbreitstein fortress sits about 387 feet above the confluence of the Moselle and Rhine rivers in Koblenz, Germany.  The construction seen here dates to between 1817-1828, although the original fortress is as old as the year 1000.  The U.S. Army occupied this 1919-1922.

The Evansville Postcards collection, RH 033, has images of banks, businesses, schools, parks, etc., largely from the first few decades of the 20th century.  Looking at these is an interesting way to explore the history of the city.  Of the images chosen to display here, none of these exist today.

Built in 1875 on Ohio Street, this business closed in 1910. All the buildings of the Mead Johnson complex, currently at this location, later subsumed it.

The F.W. Cook Brewing Company was at 11 NW 7th St. (the general location of the Civic Center today) and dates back to 1853, when it was the City Brewery.  The building shown here is a later construction, but still predates 1950.  It was razed in 1965.

This location is 101 Oakley Street.  The cigar factory closed in 1969, and Berry Plastics now occupies this location.

Until 1883, orphans of all races lived together.  Sadly, this post-integration building at 1215 N. Barker Avenue documents a different fact; it was also known as the Booker T. Washington Home.  It was razed in 1952.

This is the second such hospital in Evansville, built at 2700 W. Illinois Street in 1888.  Marine hospitals in general were to treat injured and sick river men, and later servicemen in general. As such, they were forerunners of VA hospitals.  This was razed in 1984.

Cook’s Park was an immensely popular recreation venue, located on the east bank of Pigeon Creek, where Columbia Street now crosses.  It was built around an old salt well in the mid-1800’s, and Cook Brewing took it over in the 1890’s and enhanced it with this clubhouse, a pool, casino, etc.  It failed during Prohibition and was razed.

Whether it is an undivided back postcard, printed in what looks like linen, a full color photograph, printed in Germany, sent as a greeting card, produced by the YMCA, or anything in between, you can really learn a lot from the humble postcard!

The Art History Archive: The History of Postcards

Doughboy Center—the story of the American Expeditionary Forces: The History of the YMCA in World War I

Greetings from the Smithsonian: A Postcard History