In the late 1960’s, Sears was the world’s largest retailer, holding that position until the early 1990’s.  By now you’re surely aware that Sears has declared bankruptcy, has closed a number of stores, and may be exiting the American retail scene.  Did you know that Evansville holds a place in the store’s history?  Let’s take a brief look at how Sears came to be the retail giant it once was.

The United States was a lot different than it is now back in 1886 when the event that became the kernel for Sears occurred.  In 1880, the date of the last official Census before this, the U.S. population was 50, 155, 783.  “About 65 percent of these people lived in rural areas. Only a dozen or so cities had 200,000 or more residents. And the yearly national income was about $10 billion. This was the scene when, one day in 1886, a Chicago jewelry company shipped some gold-filled watches to an unsuspecting jeweler in a Minnesota hamlet. [The population of the entire state of Minnesota was only 780,773 in 1880.] Thus started a chain of events that led to the founding of Sears.  Richard Sears was an agent of the Minneapolis and St. Louis railway station in North Redwood, Minnesota. Sears’ job as station agent left him plenty of spare time, so he sold lumber and coal to local residents on the side to make extra money. Later, when he received a shipment of watches – unwanted by a neighboring Redwood Falls jeweler – he was ready. Sears purchased them himself, sold the watches at a nice profit to other station agents up and down the line, and then ordered more for resale.  In 1886 Sears began the R.W. Sears Watch Company in Minneapolis.”

Realizing that he could do far better if he were in a larger city, Sears moved his newly born enterprise to Chicago in 1887.  He placed a classified advertisement for an experienced watchmaker; the ad was answered by Alvah C. Roebuck, a man from Indiana. “He told Sears he knew watches and brought a sample of his work to prove it. Sears hired him. Here began the association of two young men, both still in their twenties, that was to make their names famous. For it was in 1893 that the corporate name of the firm became Sears, Roebuck and Co. By the time Sears was started, farmers in rural America were selling their crops for cash and buying what they needed from rural general stores. But when they laid their money on the line for goods, farmers saw red. In 1891, the wholesale price of a barrel of flour was reported to be $3.47. Price at retail was at least $7, a 100 percent increase. Farmers formed protest movements, such as the Grange, to do battle against high prices and the “middleman.” Sears, Roebuck and Co. and other mail-order companies were the answer to farmers’ prayers. Thanks to volume buying, to the railroads and post office, and later to rural free delivery and parcel post, they offered a happy alternative to the high-priced rural stores. Years later the company adopted the motto “Shop at Sears and Save.” Because farmers could do so in the 1890’s, Sears prospered.”

Sears, Roebuck and Co. prospered very quickly.  “So fast, in fact that the company soon outgrew its rented five-story building. In 1896 Sears moved to a new six-story-and-basement building. By the turn of the century, additional buildings were built or leased in various areas of Chicago. Meanwhile, construction was started on a 40-acre, $5 million mail-order plant and office building on Chicago’s West Side. When opened in 1906, the mail-order plant, with more than 3 million square feet of floor space, was the largest business building in the world.”

Fast forward to 1925, when the company began to see that in order to remain competitive, it needed retail stores as well as mail-order outlets.  The first retail outlet independent of a catalog operation opened in Evansville that year, in a building located at 101 NW 4th St.

Plaque on side of building detailing historic site of former Sears and Robuck Company retail store at 101 NW 4th Street. The sign’s wording is misleading—this is not the site of Sears’s first retail department store—that was in Chicago. This is the first store outside of a Catalog Merchandise Distribution Center. At the time of this photograph, the Sears store had long since (1963) moved to its 100 South Green River Road. address in Washington Square Mall, 1976. Source: Gregory Smith collection, MSS 034-0466.

Sears’ building in Evansville was built in 1920 for another hardware company.

And a close-up of the building, circa 1978-1979.  By this time, the downtown store had closed (in 1975), with the expansion to other locations.  The building still stands today. 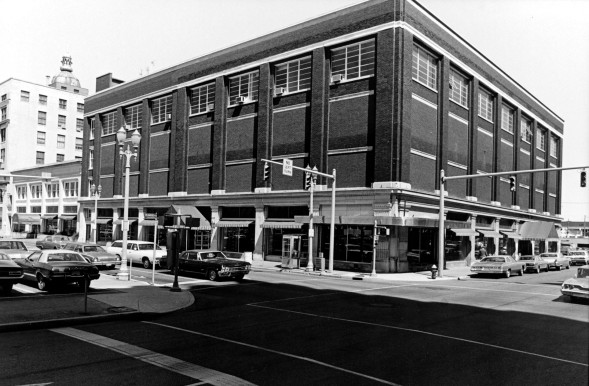 In April of this year, the last Sears outlet in Evansville closed.  Opened in 1963, it was Sears’ first mall location, in Washington Square Mall. (The mall itself opened in 1963 and was the first enclosed shopping center in Indiana.) Other locations in Evansville were a catalog outlet that opened in North Park in 1957 and became a retail store in 1961, and a bigger store on First Ave. that opened in 1967.

Jim Collins, in his book How the Mighty Fall: And Why Some Companies Never Give In, says, “Every institution, no matter how great, is vulnerable to decline. There is no law of nature that the most powerful will inevitably remain at the top.”  No one knows what the final outcome of Sears’ problems will be, but we can enjoy Evansville’s part in its history.

A Brief Chronology of Sears History

A Narrative History of Sears

Statistical Abstract of the United States: 1885