General William Tecumseh Sherman famously said, “War is hell.”  A common adage says, “War is long periods of boredom punctuated by moments of sheer terror.”  Taking a look at diaries kept by those fighting the war, both on the battlefield and at home, can serve to illustrate this.

Rice Library’s University Archives and Special Collections is fortunate to have a Civil War diary kept by James C. Greuzard, a member of the 38th Illinois Infantry.  (See this amUSIngArtifacts blog posting from October 8, 2013 for more information about this fascinating character.)  His diary has entries from Missouri, Arkansas, Mississippi, Tennessee, Kentucky, Georgia, and Alabama.  NOTE: the following entries have been lightly edited for spelling and clarity.  No content was altered. He gives these accounts for September 1863 at Chickamauga and Crawfish Spring (Crawfish Spring was the site of the federal hospital in Chickamauga).

“We now stopped at Crawfish Spring and got some water.  When on going further we heard the most terrible firing of muskets I ever heard.  We were soon on the double quick and in to it.  I cannot see how anyone escaped that murderous fire of lead.  After firing several volleys we retreated.”

He then talks about meeting Chaplain Wilkins of the 21st and helping to “put the wounded in ambulances.  Going on I had just picked up a blanket and piece of dog tent when there was a bullet whizzed past my head and I concluded to leave.  … I understand that the Rebels captured those ambulances.”

That surely was the “sheer terror” part, but there are plenty of entries that speak of boredom.

May 27, 1862, Corinth, MS:  “Day in camp all day.  It seems the nearer the boys get to battle the more they gamble….there is hardly a shade tree but what has a squad of the boys under it playing cards.”

January 18, 1863—Murfreesboro, TN: “Nothing going on in camp.  I started for Murfreesboro to see what I could see.  I went to the Pioneer Café and got a good dinner of fresh pork.  I then sauntered through the town….”

June 6, 1863—also Murfreesboro: “All quiet on the lines and in camp also after many days of rain.  We have a fine sunshiny day which makes the squirrels come out and affords fine sport to the boys catching them.” 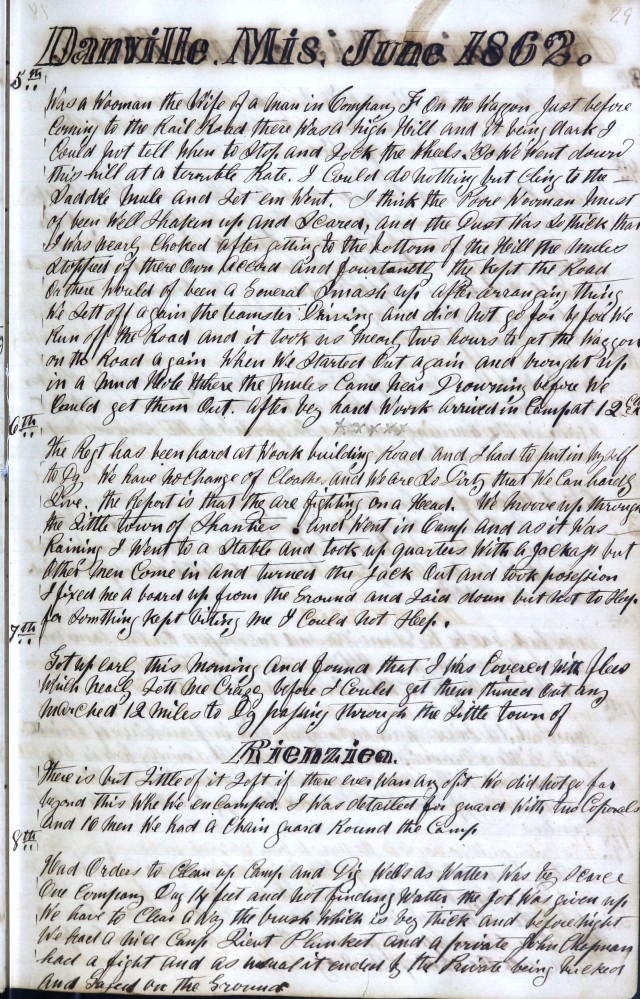 For the view from the “other side of the aisle,” i.e., from a woman with Confederate sympathies, take a look at Mary Chesnut’s Diary, aka Diary from Dixie.  Mary Boykin Chesnut was born into a wealthy, influential planter family in South Carolina.  At the age of 17 she married James Chesnut Jr., and in 1858, he was elected a U.S. Senator from South Carolina.  After South Carolina seceded from the Union, he became a personal aide to Jefferson Davis and brigadier general in the Confederate Army. Her diary is one of the leading resources for this time period.  Although there is no doubt about her Southern sympathies and attitudes, she was not naive about what war would mean. 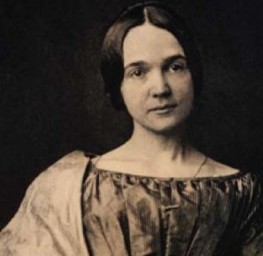 Mary Chesnut (1823-1886) is must known for her diary from the Confederate point-of-view during the American Civil War, n.d. Source: https://www.battlefields.org/learn/biographies/mary-chesnut

Shortly after secession, in March 1861, she had this entry.

“We separated North from South because of incompatibility of temper.  We are divorced because we hated each other so.  If we could only separate, a ‘separation à l’agréable,’ as the French say it, and not have a horrid fight for divorce.” (p. 18)

“When I remember all the true-hearted, the light-hearted, the gay and gallant boys who have come laughing, singing, and dancing in my way in the three years now past; how I looked into their brave young eyes and helped them as I could in every way and then saw them no more forever; how they lie stark and cold, dead upon the battle-field, or moldering away in hospitals or prisons, which is worse—I think if I consider the long array of those bright youths and loyal men who have gone to their death almost before my very eyes, my heart might break, too.  Is anything worth it—this fearful sacrifice, this awful penalty we pay for war?” (p. 276)

By the time the war neared its end, she was somewhat fatalistic in her outlook.  On September 2, 1864 she wrote,

“The battle has been raging at Atlanta, and our fate hanging in the balance.  Atlanta, indeed, is gone.  Well, that agony is over.  Like David, when the child was dead, I will get up from my knees, will wash my face and comb my hair.  No hope; we will try to have no fear.” (p. 284)

Upon receiving news of Lincoln’s assassination, she remarked in her April 22, 1865 entry,

“I know this foul murder will bring upon us worse miseries. …The death of Lincoln I call a warning to tyrants.  He will not be the last President put to death in the capital, though he is the first.”  (p. 331)

No matter how much research you read about the Civil War, little beats learning about it in the words of people who lived through it.  For more Civil War diaries in our collection, check our online catalog.  You might also enjoy Ken Burns’ The Civil War DVD, which uses diaries along with photographs, readings from documents, and historical materials to tell the story of the American Civil War.  It is available in the DVD area: E468.7 .C58 2009.