100th Anniversary of the End of World War I

November 11, 1918—specifically, on the 11th hour of the 11th day of the 11th month—World War I ended with the signing of an armistice in a railroad car outside Compiégne, France.  WWI was also called the Great War, and “the war to end all wars.”  That phrase was coined by author H.G. Wells, who hoped that the horrible destructiveness of the war would forever deter humankind from resorting to war to settle political disputes.

The shot that started the war was fired on June 14, 1914 in Sarajevo, and killed Archduke Franz Ferdinand, the heir to the Austro-Hungarian throne, and his wife, Sophie. Eventually, the players in the conflict were Austria-Hungary and its allies, Germany, Bulgaria and the Ottoman Empire (the Central Powers), lined up against the Allied Powers of Great Britain, France, Russia, Italy, Romania, Japan and the United States.  The United States, very isolationist at that time, tried to remain neutral and did not enter the war until late in the game.  The 1915 sinking of the Lusitania and the subsequent loss of 128 Americans aboard that British ship distressed the United States but did not push it into war.  In March 1916 a German U-boat torpedoed the French passenger ship the Sussex, killing many, including Americans.  The U.S. threatened to cut off diplomatic relations with Germany.  Germany responding by claiming that she, too, cared as much about the “sacred principles of humanity” as the Americans did, and took every precaution to safeguard non-combatants.  Dutch editorial cartoonist Louis Raemaekers (1869-1956), who later toured the U.S. to sway popular opinion, made it abundantly clear in this cartoon just how credence he put in Germany’s protestations.

The cartoon’s caption was, “Indeed, I am the most humane fellow in the world.”

Tensions escalated: “On January 31, 1917, in an effort to end the military stalemate in Europe, Germany declared that it would wage unrestricted warfare against all shipping vessels, neutral or belligerent, in the war zone. Although Wilson broke diplomatic relations with Germany, he refused to ask Congress for a declaration of war, arguing that Germany had still not committed any “actual overt acts” that warranted a military response.” (https://www.apstudynotes.org/us-history/topics/us-entry-into-wwi/)  Those overt acts soon occurred with the sinking of four unarmed American vessels; in April 2017 President Woodrow Wilson asked for and received a declaration of war from Congress, and the U.S. was now in World War I.

Entering into the war meant that the U.S. needed soldiers, and Evansville played its part.  Here, draft numbers are posted outside the Evansville Courier newspaper office at 125 Main St., and a crowd waits to see who was called up.

More than 135,000 Indiana citizens served in World War I, and 3,000 of those paid with their lives.  A local boy by the name of James Bethel Gresham was one of the first three Americans killed in the war.  He was born in Kentucky in 1893 but moved to Indiana in 1901 and attended Centennial School.  He enlisted in 1914, and his unit, Company F, 16th Infantry, was among the first of the American Expeditionary Forces to set foot in France, where he was killed in a raid November 3, 1917.

James Bethel Gresham, an Evansville, Indiana native, was one of the first three American soldiers, 1920. Source: Sons of Men, 1920 (Book).

In memory and honor of his sacrifice, a local fund drive raised money to build a house for his mother at the corner of Wedeking and Herndon Avenues.  She lived there until her death in 1927; the house is now being restored as transitional housing for veterans.  This photograph came from Willard Library (https://www.willard.lib.in.us/online_resources/photography_gallery_detail.php?ID=15)

Another local boy who made the ultimate sacrifice was Everett Burdette.  Born in 1895 at Fort Branch, IN, he, too, was educated at Centennial School.  In May of 1918 he was sent to Calais, France, and on September 1 of that year was killed by a shell at the battle of Mt. Kemmel.

Burdette Park at 5301 Nurrenbern Road, a very popular park and swimming pool in Evansville, is named in his honor. 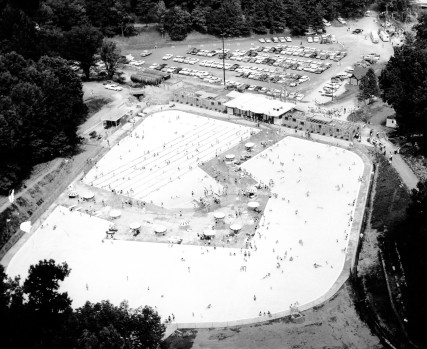 The U.S. entry into World War I helped to turn the tide in the Allies’ favor.  While it would be unfair to the other Allied combatants to say that we “won” the war, the benefit of the infusion of fresh troops and equipment at a critical time cannot be discounted.

Luxembourg is a small landlocked country bordered by Belgium, France, and Germany.  Although a neutral country, it was invaded by Germany in 1914.  It was permitted to keep its own government and political system, but the German army was omnipresent.  As the war came to an end and Germany withdraw, it was agreed that the American forces under the command of General Pershing would be the ones to liberate Luxembourg.

The war won, now the U.S. faced the logistical nightmare of getting all its troops home.  The public wanted its boys home by Christmas, but this simply wasn’t possible.  The Navy commandeered cargo ships, passenger ships, battleships, cruisers, and even German ships to get the job done.  Doughboys received an enthusiastic welcome home with ticker-tape parades, marching bands, etc.  Here’s a postcard produced by the YMCA that echoes that sentiment. 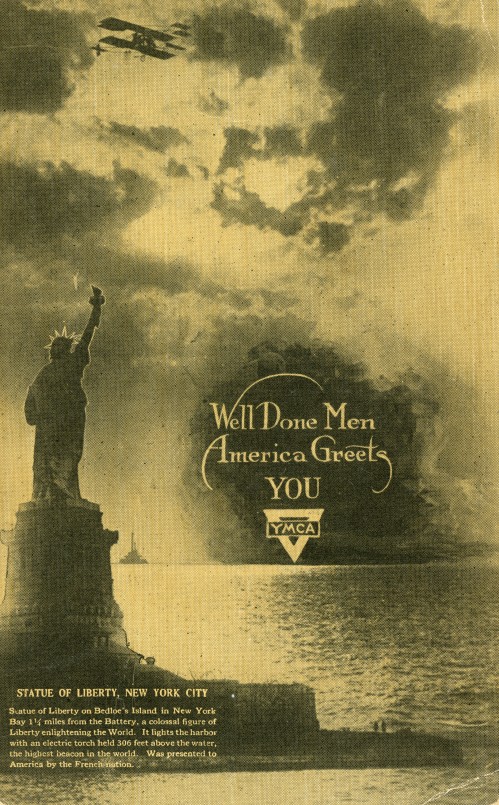 For more information on this topic, take a look at some of the sources used in this blog posting.  In addition, Rice Library’s University Archives and Special Collections has a number of photographic collections that deal with American military history.  Of particular interest for this blog is the Roy Kennedy collection, MSS 256.  Kennedy not only fought in WWI himself and took photographs, he also had contact with German photographers (presumably after the war) and received many photographs of scenes behind German lines.

The History Channel: This Day in History (https://www.history.com/this-day-in-history/world-war-i-ends)