You just never know what you will find when you dive into one of our photographic collections!  The collection in question here contains the work of Helen Wallace. Helen Wallace was born on December 5, 1891 in Mt. Carmel, Indiana. She studied at the Chicago Art Institute and was a staff artist for the Chicago Herald Examiner during the 1920’s. She worked as a portrait painter, illustrator, and fashion sketcher. Wallace passed away on November 22, 1979.

Amongst the drawings of fashion and socialites, this sketch appeared. On the back it was innocuously labeled, “Former Judge Landis as he appeared the other day at a Salvation Army campaign luncheon at the Sherman Hotel listening to the reports of the campaign.”  It turns out there’s quite a story behind this dapper man enjoying his cigar.  First, there is his name—Kenesaw Mountain Landis. For reasons variously attributed to his parents’ inability to agree on a name, to his father’s insistence, he was named for the site of a Civil War battle in Georgia.  His father, Abraham H. Landis, was a surgeon with the 35th Ohio Volunteer Infantry Regiment and was wounded at the Battle of Kennesaw Mountain in 1864.  (Note that the name of the mountain was misspelled when given to the child.) 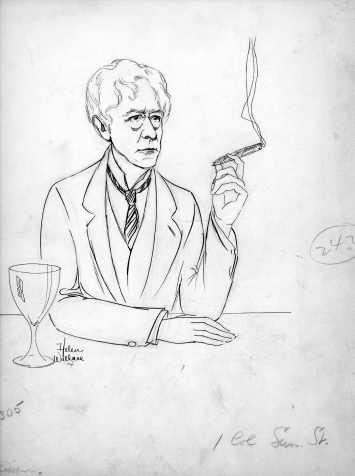 That is quite a name to live up to!  Landis was up to the challenge. The family moved to Logansport, Indiana, and Landis later played first base for a semipro team in Goosetown, IN and became its manager at the age of 17.  He dropped out of high school and held a variety of jobs, among them a court reporter. It was here he began to shine—he caught the attention of influential men and first was an aide to Indiana’s Secretary of State.  At the age of 21, he was admitted to the Indiana bar.  At this time, there were no educational or examinational requirements to pass the Indiana bar—Landis had not even been to law school!  He eventually did enroll in and graduate from law school at what today is Northwestern University and opened up a practice in Chicago. Continuing his climb, he was secretary to Grover Cleveland’s Secretary of State by the age of 26, and in 1904, President Theodore Roosevelt appointed him to a newly created federal judgeship in Chicago.  He made a name for himself in United States v. Standard Oil of Indiana, taking on John D. Rockefeller himself and levying a fine of $29.2 million.  An appeals court later overturned the verdict.

Taking on John D. was no small task, but that is not really, why Judge Landis is remembered to this day.  Remember that 17-year-old first baseman?  Landis loved baseball, and he really loved Chicago’s teams.  “In 1915, Landis presided over an antitrust case involving Major League baseball, as it had been established for a little more than a decade, with its American and National leagues. The upstart Federal League charged that the Major Leagues were, in essence, a huge trust, and the structure should be dismantled. The Federal League, it claimed, should have equal access to every player now under contract, and should be allowed to offer players as much money as the market would bear, as in an open economy. Landis knew this was a time bomb of sorts, and could have far-reaching implications. Knowing the flimsy legal structure of organized baseball, he issued a stern warning to both parties, saying, “Both sides must understand that any blows at this thing called baseball would be regarded by this court as a blow to a national institution.” His decision was — to make no decision, until the Federal League gave up the pursuit. A sports writer opined, “Many [people] felt that Landis had saved baseball in 1915.”” (http://www.u-s-history.com/pages/h2074.html)  As if baseball’s reputation wasn’t tarnished enough after this, the Black Sox scandal soon hit the news–members of the Chicago White Sox were accused of throwing the 1919 World Series.

In an attempt to restore public faith in America’s game, Landis agreed to become baseball’s first commissioner in 1920.    National League President John Heydler said,  “We want a man as chairman who will rule with an iron hand.  Baseball has lacked a hand like that for years. It needs it now worse than ever. Therefore, it is our object to appoint a big man to lead the new commission.”  Heydler and his colleagues got this in spades in Judge Landis.  He decreed, “Regardless of the verdict of juries, no player that throws a ball game, no player that entertains proposals or promises to throw a game, no player that sits in a conference with a bunch of crooked players and gamblers where the ways and means of throwing games are discussed, and does not promptly tell his club about it, will ever again play professional baseball,” He banished the 8 players for life.  He took on those who gambled on baseball, blacklisting 7 players and suspending 38 others.  No one was too big for Landis to take on.  Babe Ruth attempted to cash in on his fame in 1921 by booking post-season exhibition games, but Landis said no go.  When Ruth defied him, Landis fined him all his World Series winnings and suspended him for the first 6 weeks of the next season.  The Babe was not happy, but he never crossed Landis again.  Over the next 24 years, the judge did much to improve the game of baseball and restore its reputation.  Players and fans loved him; those in authority, not surprisingly, did not.  Kenesaw Mountain Landis served as Major League Baseball’s first commissioner until his death in 1944.  Two weeks after his death he inducted into Cooperstown’s Hall of Fame.

All this from a simple pen drawing in a collection mostly associated with fashion!  You just never know…