Once Upon a Time …

….there was a little girl named Kathleen Morrison who grew up to be an actress called Colleen Moore.  After she retired from the silver screen, she indulged her second love of dolls, and built a fairy castle enjoyed by millions of guests.

Kathleen Morrison was born in Port Huron, MI in 1899 (although she claimed it was in 1902). She and her younger brother, Cleeve, shown here, enjoyed a happy middle-class childhood surrounded by family.  The family moved to Georgia, then Pennsylvania, and finally, Florida.  “Perhaps the most important event of Kathleen’s childhood was the lucky day she and her mother went to see a very popular new play–Peter Pan. Absolutely mesmerized, she became so carried away by the story that when the famous scene arrived of Peter Pan turning to the audience and asking children to raise their hands if they believed in fairies (as Moore recalled in her biography), Kathleen stood on her chair waving her hands frantically, shrieking “I believe in fairies, I really do!!”  The laughter from the audience both surprised and delighted her–this was much more satisfying than reciting stories to her tiny audiences at home. And thus began her dream of becoming an actress.”

Her dream became a reality when her uncle, Chicago newspaperman George Howey, introduced her to famous director D.W. Griffith, who owed him a favor. After a successful screen test, she and her mother and grandmother were soon aboard a train, Hollywood bound. A quick study and a hard worker, the newly-minted actress made a couple of films for Griffith, honing her skills along the way through her 6-month contract. She also made a number of films for other studios.

For most of her early roles, Colleen played girlish, innocent heroines and love interests.  By the early 1920’s, however, the appearance of the flapper was rocking the foundations of American society. “Industrialization had made it possible for women to hold jobs that did not require the strength of their male counterparts. Armies of newly-minted stenographers and typists descended upon the cities where they could make a living. The cities themselves made it easy for a woman to live alone and yet be able to acquire all the necessities of life.  By the 1920s, it was clear that women were not sticking to the expected ideals.  There were jobs available in big cities, comforts undreamed of on the farm. They smoked and drank and had sex. They wore makeup, discarded their restraining corsets, and enjoyed sinful jazz music. Their whole generation was going to hell in a hand basket, their dismayed elders exclaimed. Flappers were women of questionable morals and subject of both fascination and fear by the public.” 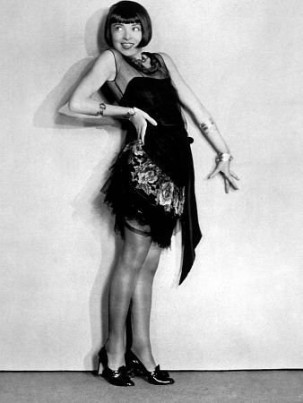 Her performance in Flaming Youth got good reviews, and the new Dutch-boy style haircut seen here, created by her mother, was widely imitated. Her career flourished and she went on to make many more movies.  The end of the decade saw the introduction of a new phenomenon, the talking motion picture, or “talkie.” Colleen made 4 talkies, but none of them was particularly successful.  She decided that she had had a good run in Hollywood, and cutting her losses, she retired from acting in 1934.

Fortunately, Colleen was a shrewd investor and savvy financial manager, so she now had the time and wherewithal to indulge in her passion for dolls. Back in 1928, she and her father had decided to build the most deluxe of dollhouses, the dollhouse to end all dollhouses. A set designer and an architect were involved in planning the 9 ft. square, 13 room structure, which included a 12 ft. tall bell tower. Some 100 people worked on the project between 1928-1935. “An intricate work of art, it featured thirteen fairytale-themed rooms complete with gorgeous miniature furniture, hand-painted murals and teeny paintings, and even a tiny library with miniature books signed by famous writers of the day. No expense was spared–real gold, diamonds, and other trimmings were used to make it as beautiful as possible.”

The piano in the drawing room is 6.25 inches long, 2.75 inches wide, and 3 inches high with the top closed. The Royal Doulton dinner service in the kitchen is an exact replica of that in Queen Mary’s dollhouse in Windsor Castle.  Floors are of marble and inlaid wood.  The total cost, in 1935 dollars, was almost $500,000.

She continued to tweak her creation all her life, and during the Great Depression, she used it as a force for good. “In 1935 Colleen Moore’s child-like fascination with her Fairy Castle was transformed by the Great Depression into a passion for helping children. She organized a national tour of the Fairy Castle to raise money for children’s charities. The tour stopped in most major cities of the United States and was often exhibited in the toy departments of prominent department stores such as Macy’s in New York City, The Fair in Chicago and May Co. in Los Angeles. A brochure from The Fair in Chicago promotes it: “A museum in itself—it awaits you—starting November 15th in our Eighth Floor Toyland. You will want to see it again and again.” The tour was a huge success and raised more than $650,000 between 1935 and 1939.” University Archives and Special Collection has a copy of Colleen Moore’s Doll House Cut-Outs, a child’s activity book that was produced for the Ullman Toy Department when the exhibit was there (MSS 084), and a copy of The Enchanted Castle, a children’s storybook written by Moore in 1935 that takes place within the castle. (Special Collections, call number PZ8.M802 En)

Since 1949, Colleen Moore’s Fairy Castle has been on permanent display in a climate controlled environment at Chicago’s Museum of Science and Industry (MSI). In a 9-month project in 2013-2014, the castle was taken apart and repaired, and when restored to its original glory, reassembled by a team of curators. Each of the 1500 pieces was put back in place by hand.  Some were so small that the curators wore masks so as not to inhale them! MSI has a fascinating YouTube video that shows this process in less than three minutes.

Once upon a time a little girl grew up to create a masterpiece where a once upon a time story might have taken place. Maybe fairytales can come true!