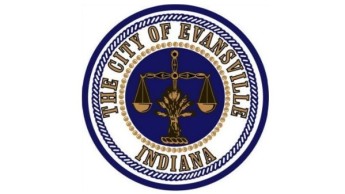 “Hizzoner” is a corruption of the words, His Honor, used to refer to mayors.  Although it’s more commonly used in big cities, particularly New York City, I’m using it to kick off this brief exploration of some of the mayors of the city of Evansville.

“The City of Evansville was incorporated as a city by an act of the General Assembly of the State of Indiana, which was approved January 27, 1847, and entitled “An act granting to the Town of Evansville, in the County of Vanderburgh, a City Charter.”  Evansville’s first mayor was appointed on April 12, of the same year.”  Note that this refers to Evansville as a city. As early as 1819, only 3 years after Indiana gained statehood, it had been incorporated as a town, but it now moved into the “big leagues” of cityhood.

The mayor with possibly the shortest term in office was Eccles G. Van Riper (1841-1914).  Mayor William Hall Walker died in office on September 9, 1870, and Van Riper was appointed to fill the last 3 months of his term. Van Riper was offered the nomination for the upcoming election, but declined to accept it, wishing to spend his time on business instead of politics.  But the interesting thing about Van Riper is his adventures during the Civil War.  In 1862, the company for which he was working, Messrs. Fatman & Co., decided to go into the cotton business.  “He was sent to Alabama, and did a splendid business there, until the fall of Memphis, when he removed his headquarters there, and immediately started on a trip through the federal lines in Arkansas. He went about 80 miles in the interior, crossed the St. Francis River, and on the fourth day was captured by the Rebels and charged with being a Spy. After wandering for two weeks in the bushes with them, he was at last taken to Little Rock on foot, and thrown into jail. He remained there three weeks without hearing what was to become of himself, and without having a friend in the State. Gen. Hindman was in command of the confederates. Mr. Van Riper wrote several letters to headquarters asking to be heard or released. At last one Sunday afternoon, he was escorted by a guard of Soldiers to the Anthony House in Little Rock, and went through the farce of a trial before a drumhead court martial, composed of three officers. Of course he had no witness, and they would not take his word for anything. It was enough that they charged him with being a Spy and found him guilty, and sentenced him to be hanged on the Tuesday following at 12 M., not a very agreeable prospect to say the least for a young man. He was apprised of it and became reconciled. On Monday night a new commander for that district arrived, General Holmes, an old U. S. Army officer; had traveled night and day from Richmond, to relieve Hindman, on account of his cruelties. There was a reign of terror in Little Rock, and hanging and shooting were the order of the day. Gen. Holmes reprieved everybody under sentence, and after a re-examination of his case he sentenced him to the penitentiary to remain during the war. This was in July, 1862. He was kept in solitary confinement for a period of five months, spending his twenty-first birthday in prison. He was now released through the intercession of President Lincoln, acting through Gen. Sherman. Messrs. Fatman & Co. had labored hard to this end. He came out a sickly young men, having lost 45 lbs. by the wretched treatment which he received.” (White, p. 388-389) One final note of interest about Eccles G. Van Riper—he married the daughter of Evansville’s first mayor, James G. Jones. Look at this story on Van Riper, produced by 44 News, October 31, 2016 at: http://44news.wevv.com/mystery-behind-missing-mayor-evansville/. 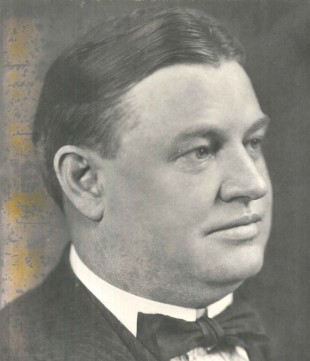 Bosse was both a reformer and a promoter.  His favorite slogan was, “When everybody boosts, everybody wins.”  During his tenure:

Bosse was in his third term when he died unexpectedly at the age of 47. Crowds for his funeral were so large that it was held at the Coliseum. Here are people surrounding his house, at 813 SE 1st Street as his casket is carried down the steps. 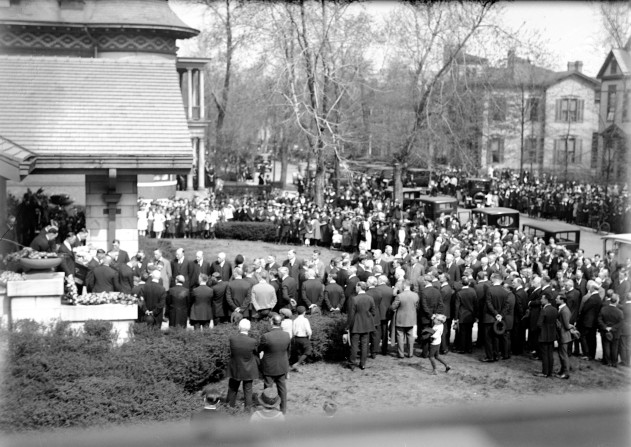 Bosse had little formal education himself, but he was a big promoter of its value.  Benjamin Bosse High School at 1300 Washington Avenue is named in his honor. It was built in 1922. 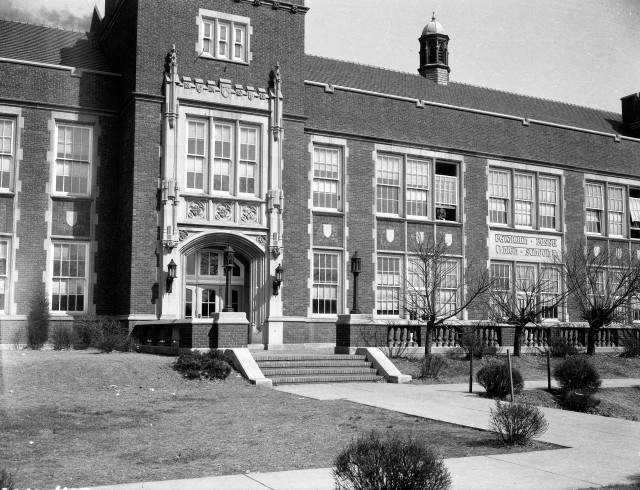 Also named in his honor is the nation’s 3rd oldest-still-in-regular-use-for-professional-baseball ballpark, built in 1915—Bosse Field at 23 Don Mattingly Way (only Fenway Park and Wrigley Field are older). 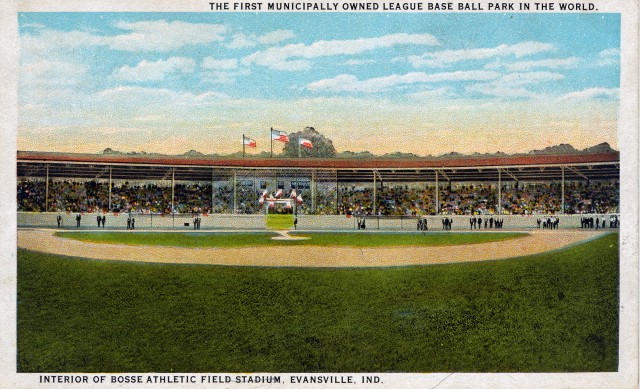 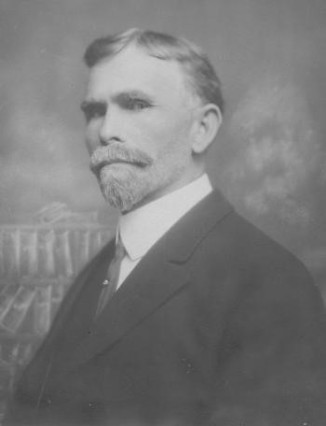 John William Boehne, Sr. (1856-1946) was born in a log cabin in Scott Township in Vanderburgh County, the son of German immigrants. At the age of 17, he came to Evansville and worked at his uncle’s grocery store while attending Kleiner & Reitz Commercial College. After working as a bookkeeper for another firm, he co-founded a firm that became Indiana Stove Works. “When the firm was incorporated in 1887 he became secretary, treasurer, and general manager.  Much of the success of the company is due to his ability as a manager and his close attention to detail” (History of Vanderburgh County, Indiana…, p. 415). He served as mayor from 1905 to 1909, when he resigned because he was elected to the U.S. Congress.  In 1908, he was a delegate to the Democratic National Convention from Indiana. After 4 years in Congress, he served as director of the Federal Reserve Bank at St. Louis. During his mayoral administration the filtration/waterworks plant was built; prior to this households took their water directly from the river. This improvement helped to eradicate typhoid fever outbreaks in the city.  In 1907/1908, in response to tuberculosis outbreaks, an open-air tent colony treatment facility was opened on land donated by Boehne. When the county took over operation in 1924, it was renamed Boehne Tuberculosis Hospital, aka Boehne Camp Hospital. 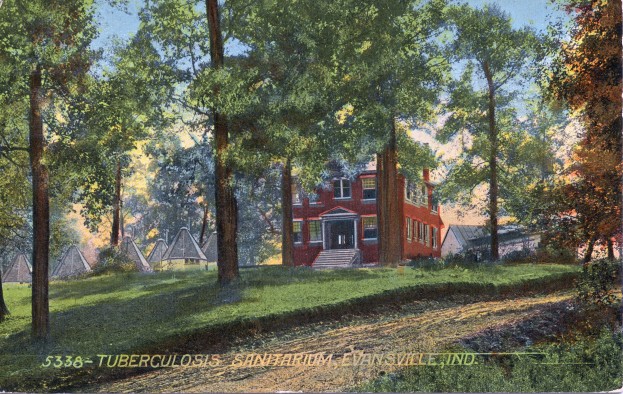 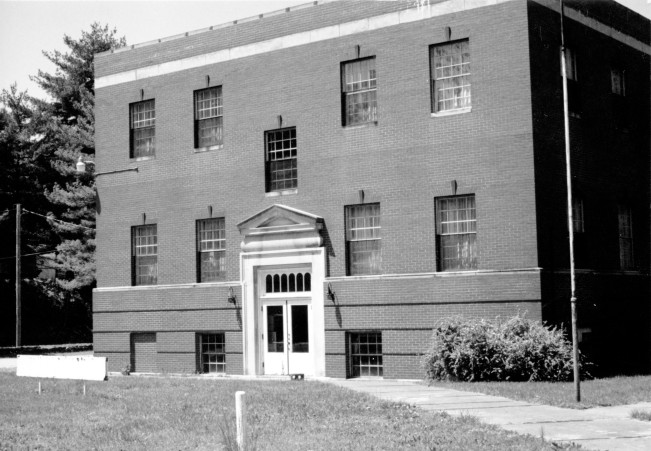 A building at Boehne Camp Hospital, located on Boehne Camp Road between Hogue Road and Upper Mt. Vernon Road. The hospital closed in the 1960’s, and the main building was razed around 2000.  This is thought to be the administration building. It still stands and today houses luxury apartments, 1989. Source: Regional Photographs collection, RP 031-022. 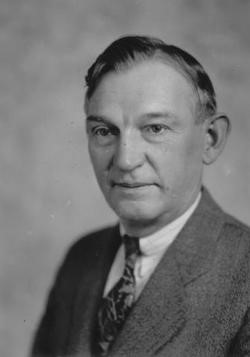 William H. Dress (1879-1949) was mayor of Evansville twice, 1935-1942 and 1948-1949 (he died in office). He also served as Vanderburgh County Treasurer (dates unknown) and was a delegate to the Democratic National Convention from Indiana in 1940. Dress’ first term as mayor took place while the country was still struggling to recover from the Great Depression. One of the federal agencies created to help with the recovery was the Public Works Administration (PWA). It “budgeted several billion dollars to be spent on the construction of public works as a means of providing employment, stabilizing purchasing power, improving public welfare, and contributing to a revival of American industry. Simply put, it was designed to spend “big bucks on big projects.”” Evansville got its share of PWA projects, one of which was riverfront improvement. “On May 14, 1936, Mayor William H. Dress pried out a twenty-pound cobblestone from the old levee which had been put there in 1848. This started the riverfront improvement project, which had been a dream of citizens and rivermen for many years…. The P.W.A. provided the labor and materials for the project….  The name, Dress Plaza, was given to it by the designer, Louis Geupel, who was then city engineer.”  (Morlock, p. 200)

If you noted that date of 1936 and know anything about area history, you’ll realize that Mother Nature presented Mayor Dress with his next challenge, in the form of the 1937 flood. (Brief background: torrential rains, in addition to ice and snow, in January 1937 caused massive flooding all along the Ohio River valley. Not until January 31 did the river peak in Evansville, at 54.74 ft. This is almost 19 ft. above what the flood stage was back then.  Martial law had been declared, with federal troops and WPA (another Depression program, the Works Progress Administration) workers sent in to maintain order and restore the city.) Only 6 months after it was constructed, that Dress Plaza riverfront improvement project looked like this. 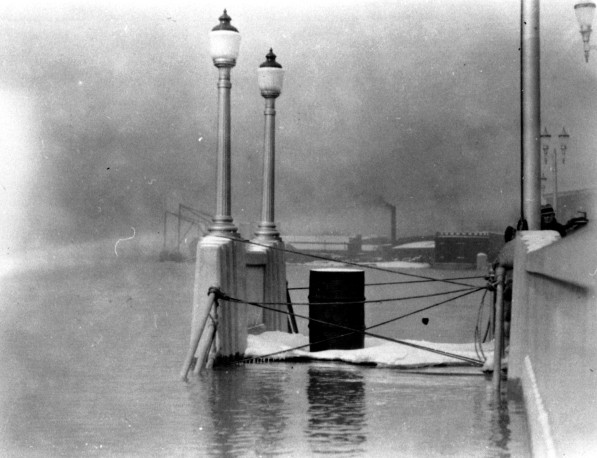 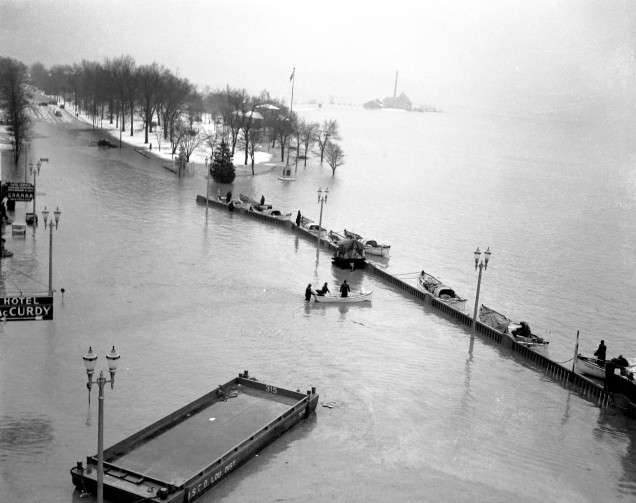 Dress Plaza is completely covered here—it would be to the right of the lamp posts, 1937. Source: Thomas Mueller collection, MSS 264-0333.

Despite being under martial law, Mayor Dress had his part to play in recovery.  In the first picture below, the leftmost man is Dress, next to him is James Fieser, vice president of the American Red Cross, and then Dr. Thomas Parran, Jr., Surgeon General for Public Health Services.  They are discussing flood information.  In the second photo, Harry Hopkins, advisor to President Franklin D. Roosevelt and director of his WPA, is lunching with Dress. Hopkins is the man with the newspaper; Dress is the other man smoking. 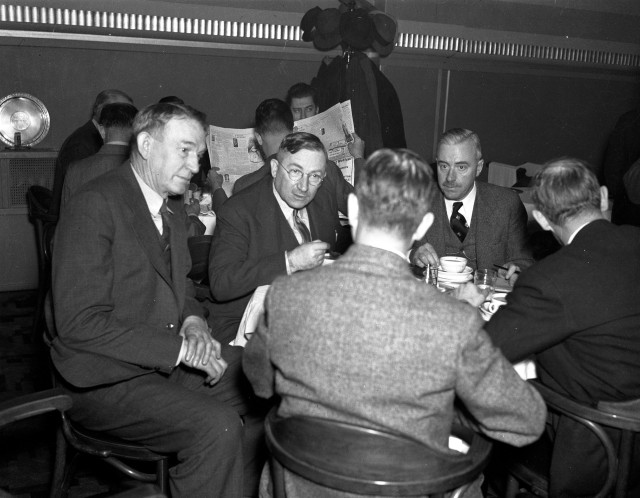 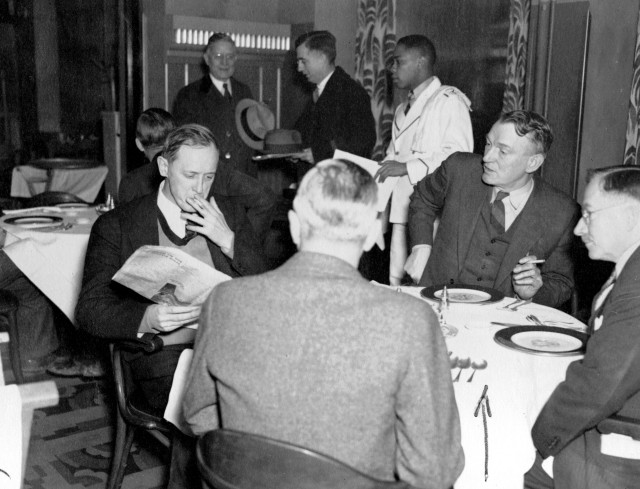 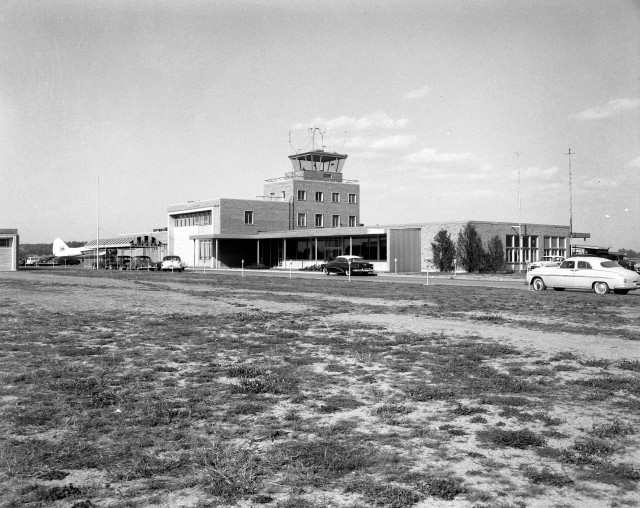 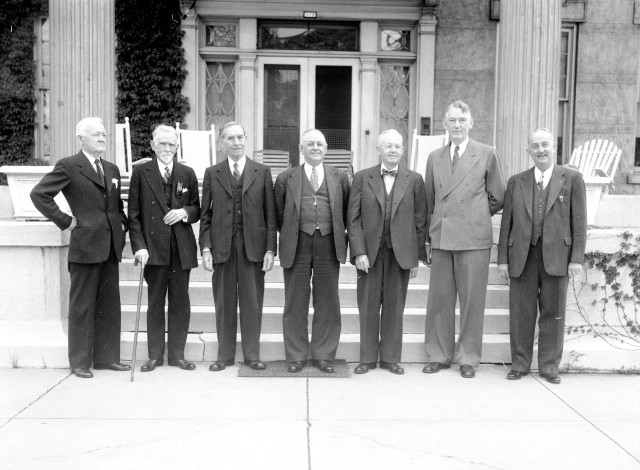 Evansville has had 37 “hizzoners” since the first was appointed in 1847.  The incumbent, Lloyd Winnecke, is in his second term, making him no. 36 and 37.

Elliott, Joseph Peter.   A History of Evansville and Vanderburgh County, Indiana: A Complete and Concise Account from the Earliest Times to the Present, Embracing Reminiscences of the Pioneers and Biographical Sketches of the Men who Have Been Leaders in Commercial and Other Enterprises.  Evansville, Ind.: Keller Print. Company, 1897.  (Google Books online); also in print in the General Collection  F532.V2 E4; there is another copy in the Regional Collection section of University Archives/Special Collections

History of Vanderburgh County, Indiana: From the Earliest Times to the Present, with Biographical Sketches, Reminiscences, etc.  Evansville, IN: Unigraphic, Inc., 1979 (reprint of a 1889 publication)   General Collection F532.V2 H5 1979; there is another copy in the Regional Collection section of University Archives/Special Collections