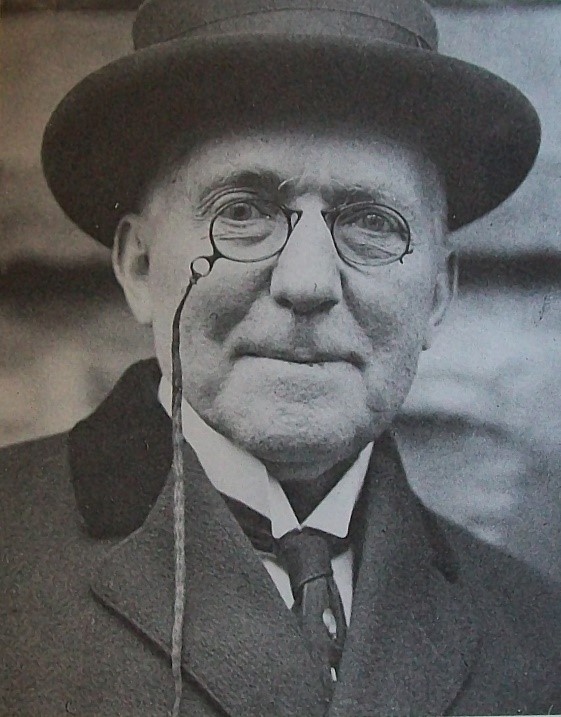 James Whitcomb Riley (1849-1916) was born in Greenfield, Indiana; his father was an attorney and member of the Indiana legislature who named his son after his friend, former Indiana governor and U.S. Senator James Whitcomb. Despite his father’s aspirations for him, the young Riley was a far less than stellar student and lacked any sense of ambition for a professional career like his father’s. Indeed, one of his teachers, despairing of Riley’s inability to grasp mathematics, focused instead on literature, reading, and acting.

Leaving school at age 16, Riley tried his hand at a number of jobs: sign painting, clerking in a shoe store, and working in a traveling medicine show. Surprising, both the sign painting and medicine show jobs proved beneficial for Riley’s future success. He encountered rural life (important for his poetry) and in his medicine show performances. developed those recitation and acting skills his teacher had nurtured in him.

Riley’s experiences soon convinced him that poetry—writing, publishing, and reciting—was his métier. He took a job as a reporter for the Anderson Democrat, and began to submit his poems for publication in local newspapers. Their reception was not always as he hoped. “In a rather spiteful response to this cool reception, he decided in the summer of 1877 to prove his point that any poem would become successful and popular if the author were assumed to be “a genius known to fame” by perpetrating a literary hoax: he wrote a poem which he entitled “Leonainie,” signed it with the initials “E.A.P.,” concocted the story that this was a long-lost poem by Poe newly discovered on the fly-leaf of a dictionary owned by a local gentleman, and arranged for it to printed in the Kokomo Dispatch.” (Critical Survey…., p. 2765)

What Riley considered to be merely a local joke soon grew to what, in today’s parlance, we’d call viral. Within a month the fraud was exposed and Riley confessed and was fired by his editor. In an ironic twist, there were those who firmly believed the poem was indeed authored by Poe, and regarded Riley’s confession as the true fraud! Although the scandal haunted Riley the rest of his life, he landed on his feet and was immediately hired by the Indianapolis Journal.

Indianapolis became Riley’s home during the 11 years he spent with the Journal, and indeed, for the rest of his life. He formed a lucrative deal with Bobbs-Merrill publishing company, which by 1949 had sold more than 3 million copies of his works. In 1881, he signed with Redpath Lyceum Bureau Circuit, and became a wealthy and immensely successful performer. “Riley….was a charismatic speaker: having developed a striking stage presence, Riley could slip in and out of Hoosier dialect at will, and had so perfectly rehearsed his comic commentaries on his own poems that they seemed to be the spontaneous remarks of an unusually witty, genial man of the soil. The Riley-the-poet whom thousands flocked to see and hear was in fact a character or persona created by Riley-the-actor, with every gesture, aside, and intonation meticulously prepared in advance.” (Critical Survey…., p. 2766) He became well known enough to share the stage with literati such as Mark Twain, James Russell Lowell, and William Dean Howells. In 1891, he conducted a “triumphant” tour of Britain and was toasted at London’s famous Savoy Hotel.

Riley was extremely popular during his lifetime, and upon his death in 1916, “some thirty-five thousand people passed his bier under the dome of the Indiana state capitol.” (Dictionary, p. 434) His popularity, built largely upon his oratorial skills, soon declined. His poetry is seen as sentimental and romantically harkening back to a simpler time that never really existed. His use of “rural Hoosier” dialect may ring offensive in modern ears.

The Raggedy Man’s so good an’ kind

Ever’thing ‘at you make him do—

An’ won’t run off—’less you want him to!

I drived him wunst way down our lane

An’ he got skeered, when it ‘menced to rain,

An’ ist rared up an’ squealed and run

Nen he skeered ag’in at a’ old tin can …

This is the 4th stanza from “The Raggedy Man,” published in 1890. Riley said that the Raggedy Man was not a tramp, just a poor hired hand who played with the children. The story is told from a child’s perspective and that colors the narrative, yet it’s still difficult to hear.

Today, James Whitcomb Riley is probably better known for things named for him, such as the Riley Hospital for Children in Indianapolis. The hospital is renowned for its groundbreaking research and treatment for Indiana children, regardless of the ability to pay.

There are a couple of schools named for Riley in Indiana—a high school in South Bend and an elementary school in Indianapolis. There once were more, including this no longer existing school in Mt. Vernon. Located at 1000 West 4th Street, this building now serves as the Metropolitan School District of Mt. Vernon’s office.

Some 29 volumes of early edition, some first editions, Riley works were donated a few years ago–stop by University Archives Special Collections and look.

In the next blog, we’ll explore Riley’s connection to today’s musical theatre.