“The Sun’ll Come Out Tomorrow…”

You probably recognize this as a lyric from the musical Annie, which premiered on Broadway in 1977 and won a Tony award for Best Musical. There were Broadway revivals in 19997 and 2012, it was made into a movie in 1982 and again in 2014, and there was even a television version in 1999. Suffice it to say that Annie was a hit. But did you know there was a Hoosier connection?

This is a two-part connection, so bear with me. In the last blog, I wrote about Hoosier poet James Whitcomb Riley. He wrote a poem entitled “Little Orphant Annie” in 1885, based upon a true childhood encounter. “Mary Alice “Allie” Smith was an Indiana neighbor of the Riley family. When her father was killed in the Civil War, twelve-year-old Allie—the name change was a typographical error—came to live with the Rileys; the future poet was a child himself. Allie apparently entertained the other children of an evening with scary stories that made a huge impression on young James.”

Little Orphant Annie’s come to our house to stay,

An’ wash the cups an’ saucers up, an’ brush the crumbs away,

An’ shoo the chickens off the porch, an’ dust the hearth, an’ sweep,

An’ make the fire, an’ bake the bread, an’ earn her board-an’-keep;

An’ all us other childern, when the supper things is done,

We set around the kitchen fire an’ has the mostest fun

An’ the Gobble-uns ‘at gits you

Onc’t they was a little boy wouldn’t say his prayers,–

So when he went to bed at night, away up stairs,

An’ when they turn’t the kivvers down, he wasn’t there at all!

An’ they seeked him in the rafter-room, an’ cubby-hole, an’ press,

An’ seeked him up the chimbly-flue, an’ ever’wheres, I guess;

But all they ever found was thist his pants an’ roundabout–

An’ the Gobble-uns’ll git you

An’ one time a little girl ‘ud allus laugh an’ grin,

An’ onc’t, when they was “company,” an’ ole folks was there,

She mocked ‘em an’ shocked ‘em, an’ said she didn’t care!

An’ thist as she kicked her heels, an’ turn’t to run an’ hide,

They was two great big Black Things a-standin’ by her side,

An’ they snatched her through the ceilin’ ‘fore she knowed what she’s about!

An’ the Gobble-uns’ll git you

An’ little Orphant Annie says when the blaze is blue,

An’ the lamp-wick sputters, an’ the wind goes woo-oo!

An’ you hear the crickets quit, an’ the moon is gray,

An’ churish them ‘at loves you, an’ dry the orphant’s tear,

An’ he’p the pore an’ needy ones ‘at clusters all about,

Er the Gobble-uns’ll git you

This poem just begs to be read aloud. It’s easy to see why a gifted orator/actor such as Riley could make it such a hit on his lecture circuits. 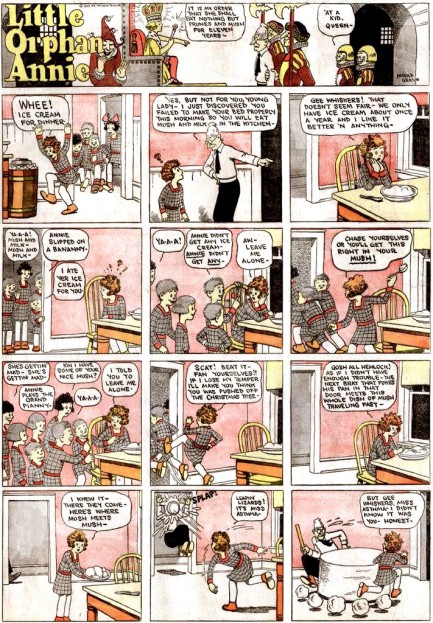 That’s step one. Harold Gray (1894-1968) was born in Kankakee, Illinois, but his family moved to West Lafayette, Indiana while he was still in school. He graduated from Purdue University, another Hoosier connection, in 1917 and found work with the Chicago Tribune. For 4 years he worked as an assistant to cartoonist Sidney Smith, developing his own love and talent for the art. In 1924, he proposed a new comic strip, to be called Little Orphan Otto. “Believing a character who had no allegiance to family or society would free them up for adventures, he decided to make his protagonist an orphan. Originally a young boy named Otto, Gray decided to switch genders when he realized that of the 43 strips running at the time, only three featured women in prominent roles. Little Orphan Otto became Little Orphan Annie, entering syndication in 1924.”

That was step two. Apparently, Riley’s poem was reprinted in the Tribune at that time, hence the inspiration. To be fair, the connection is a bit thin, based mostly on the name, but it is there. “A staunch conservative, Gray often used the powerful platform he had as a widely distributed cartoonist to comment on the politics of the day. Opposed to government interference in private financial affairs, in 1936 he ran a series of strips in which “Daddy” Warbucks is harassed by “political racketeers” and denounces virtually anyone holding public office. Newspaper editors were not pleased, claiming Gray was being too subversive for the funny pages. West Virginia’s Huntington Herald-Dispatch pulled the strip and replaced it with a banner that read: “Deleted! For violation of reader trust!” The syndicate soon circulated word that Gray would be starting a new story, one free of any political subtext. … For a 1956 story in which Annie runs afoul of a vicious street gang, papers including the St. Louis Globe-Democrat and the Ohio State Journal suspended the strip for depictions of muggings, knives, and other unsavory content. Annie returned to their pages only after her dalliances with juvenile delinquents had come to an end.” Gray’s comic strip was extremely popular, continuing for 44 years until his death. After his death, other cartoonists took over, and sometimes “classic Annie strips” were rerun, until it was finally cancelled in 2010.

NOTE: The original matron at the orphanage was named Miss Asthma, as seen in this comic strip—the name was changed to Miss Hannigan for the musical and then maintained in the movie.

Watch out for those gobble-uns!!

1 Response to “The Sun’ll Come Out Tomorrow…”