… in Indiana—let’s learn a bit more about your home state/your adopted state/where you’re currently living while at USI. First, just a bit of clarification….that song lyric I quoted in the title is NOT from the official state song (which is “On the Banks of the Wabash, Far Away,” written by Paul Dresser).

Indiana entered the Union on December 11, 1816, becoming the 19th state. It has 92 counties. Knox County (Vincennes) was organized April 20, 1790, making it the oldest county; Newton County (on the Illinois border in northwestern Indiana) is the newest, organized December 8, 1859. Vanderburgh County was organized February 1, 1818.

Marion County (Indianapolis) is the largest by population, with 950,082 in the 2017 estimate. Ohio County, with only 5828 residents, is the state’s smallest. It is on the Kentucky border in the southeastern part of the state, part of the Cincinnati MSA (metropolitan statistical area). Vanderburgh County’s population in that same estimate was 181,616, ranking it 7th in the state.

In a 2017 estimate of the population for Indiana’s towns and cities, the top five were:

Getting to the Indiana territory, and later the state of Indiana, was no easy task in its early settlement days. “Transportation in Indiana during the late 1700s and early 1800s was mainly done by river. Many early settlers to Indiana traveled by floating down the Ohio River. Products and crops were sent by flatboat to be sold at market. The most common boats used during this time were flatboats. A group of men could construct a flatboat in about 30 days. If they were transporting products and crops they would load them onto the flatboat and float down the Ohio River.” The state was thus settled, at least roughly, from south to north. This also explains why Corydon served as the first state capital from 1816-1825—at that time it was central to the population base. The 1822 map shown above illustrates this south to north migration. Text that accompanies it notes that “the northern part of the state is still occupied by Indians and has been very imperfectly explored. The southern part is inhabited by whites….” At this time, only 35 of Indiana’s 92 counties were established. 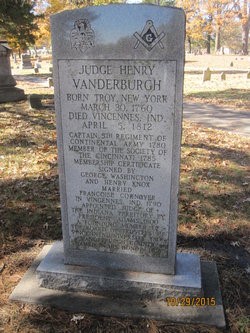 Let’s take a closer look at 6 of those first counties, the ones closest to our current location, and see how they got their names. Vanderburgh County, organized February 1, 1818, was named for Henry Vanderburgh (occasionally seen as VanderBurgh), a territorial judge. “Vanderburgh was born in Troy, New York, in 1760. On November 21, 1776, at age 16, John Jay appointed Vanderburgh Lieutenant in the Fifth New York Regiment of the Continental Army. John Hancock re-appointed him, and later he was commissioned Captain in the Second Regiment. He served until the close of the Revolutionary War in 1783. Vanderburgh was a territorial judge [appointed by President John Adams] during the organization of the Indiana Territory, a position he occupied until his death April 12, 1812.” NOTE: Although the gravestone shows a death date of April 5, every other source consulted had April 12.

Gibson County, organized April 1, 1813, was named for John Gibson, a governor of the Indiana Territory. Gibson was born May 23, 1740, in Lancaster, Pennsyvlania and saw military action in the French and Indian War. He later acted as a translator and negotiator with Native Americans. Although he is credited with being the 2nd Indiana territorial governor, he was acting governor when Governor William Henry Harrison was away. He served in this capacity July 4, 1800 to January 10, 1801 and June 1812 to May 1813. His true role was secretary of the Indiana Territory 1800-1816. Upon Indiana statehood, Gibson returned to Pennsylvania where he died April 12, 1822. Here’s a view of what the Indiana territory looked like circa 1812.

The final governor of the Indiana Territory was Thomas Posey, for whom Posey County (organized November 11, 1814) is named. He was born in Fairfax County, VA, July 9, 1750 and served in the Revolutionary War–he was appointed captain in a Virginia regiment, promoted to the rank of major in 1778 and the following year made colonel, and was present at the surrender of Yorktown in 1781. He moved to Kentucky in 1794 and served in various positions in its state government until he moved to Louisiana, where he was appointed to the United States Senate to fill the vacancy caused by the resignation of John N. Destrehan and served from October 8, 1812, to February 4, 1813. Posey then was appointed and served as governor of the Indiana Territory March 3, 1813 to November 7, 1816. He died on March 19, 1818.

Pike County, organized February 1, 1817, was named for Zebulon Montgomery Pike (1779-1813), for whom Pike’s Peak is named. Born in New Jersey, Pike was the son of a Continental Army officer and grew up at various military posts. A fervent nationalist, Pike joined the army himself at the age of 15. After the Louisiana Purchase and the trek of Lewis and Clark, Pike was delighted to be ordered to first explore the upper Mississippi River valley, and in 1806-1807, the southwestern part of the Louisiana Purchase, of which Colorado was a part. “On November 15, west of present-day Lamar, Pike spied what he described as a small blue cloud on the horizon. It turned out to be a mountain. A few days later, with three of his sixteen men, he left the river to climb to the summit of what he called the Grand Peak. Later, that peak would bear his name, Pikes Peak. Slowed by rough terrain and inadequate supplies, the climbers never reached the top.”  Pike went on to fight in the War of 1812 and was killed in action at the battle of York (today’s Toronto, Canada) on April 27, 1813.

Spencer County (organized February 1, 1818) is named in honor of Spier Spencer. Spencer was born in Virginia (the year is uncertain, but somewhere between 1770-1776) and moved with his family to Kentucky, where he later married. In 1809 Spencer was appointed by Indiana Territorial Governor William Henry Harrison as the first sheriff of Harrison County. Spencer headed a Harrison County militia group called the Yellow Jackets (after the color of their uniforms); this group fought in the Battle of Tippecanoe. Spencer was mortally wounded there November 7, 1811. According to a dispatch sent from Governor Harrison to the Secretary of War, “Spencer was wounded in the head. He exhorted his men to fight valiantly. He was shot through both thighs and fell; still continuing to encourage them, he was raised up, and received a ball through his body, which put an immediate end to his existence…” Spencer County, Kentucky, as well as the town of Spencer, Indiana, are also named in his memory.

Another casualty of the Battle of Tippecanoe was Jacob Warrick. Born in Virginia in 1773, he moved with his family to Kentucky, where he married, and later moved to Indiana. He served as a militia captain in the Battle of Tippecanoe. According to General Harrison’s official report of the battle, “Captain Warrick was shot immediately through the body and taken to the surgery to be dressed. As soon as it was over, being a man of great bodily vigor and able to walk, he insisted on going back to the head of his company, although it was evident that he had but a few hours to live.” Warrick County might be called the “Mother County” of southern Indiana as it originally encompassed all of Perry, Posey, Spencer and Vanderburgh counties, as well as a portion of Crawford County. 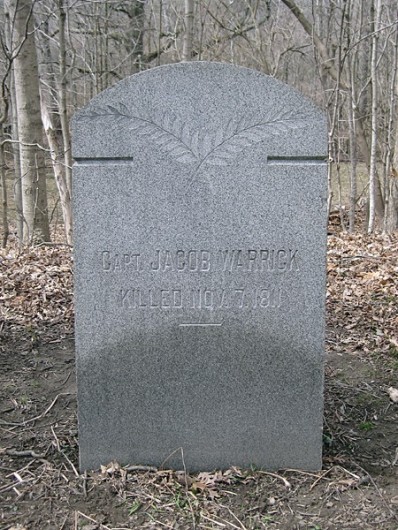 We think of Indiana as a solidly midwestern state, but this brief glimpse into its history shows it played its part, on what was once the western frontier, in the expansion of the United States from “sea to shining sea.” Whether you are a Hoosier born, have adopted Indiana as your own, or hail from near or far away, you now know a little bit more about the place where you currently find yourself.

NOTE: if you would like to know more about your own county, just click on the “Leave a Comment” link at the end of this blog and let me know where you’re from. If there is enough interest, I’ll write another blog, but will respond to you individually if you provide your e-mail. This offer is good for any U.S. state/county.