Delving Deep into the Past

You can learn a lot about history by visiting cemeteries. With apologies for the pun in the title, let’s head over to Evansville’s Oak Hill Cemetery.

“Oak Hill was the second of Evansville’s platted, public burying grounds and succeeded a small 2 ½ -grave yard opened in the 1830s on the southeast edge of the young village. By mid-century, however, there evidently arose a need for a new public Cemetery and, in a Common Council meeting of 12 August 1850, a committee was appointed to reconnoiter the surrounding countryside for the purpose of finding a new Cemetery site. Within two years, 56 acres had been acquired 1 ½ miles northeast of the town, and by February 1853 lots were offered for sale. The first interment occurred on the 18th of February, and later land purchases (up until 1924) gave the Cemetery its present acreage.”

First, we need a bit of background about the time period. For the Victorians, death was a very real and ever-present threat. Diseases like smallpox, cholera, and tuberculosis (called consumption) ran rampant. Sanitation and hygiene, especially the understanding of their importance, were virtually non-existent. Your very surroundings could kill you: “The floral wallpapers in prosperous parlours, and the brilliant leaves on fashionable hats, could kill the workers who had close contact with the arsenic in the green dye. … There was arsenic everywhere in the home – in the bathroom, to remove superfluous hair, in the garden to kill rats, in the kitchen to kill flies.” The average middle-class gentleman might hope to live to 45, but those in the working class had a life expectation of half that. A child living until his/her 5th birthday was the happy exception. Childbirth was a risky business. For a woman, who could find herself pregnant nearly constantly given the lack of contraceptive options, death in childbirth (often due to infection introduced by the birth attendant) was a very likely outcome.

“In the Victorian era when men, women, children, and the elderly were dying at an unprecedented rate, people didn’t want to be reminded of death and damnation when they buried their dead. They wanted to mourn in peace.   The architect Sir Islington Wren had introduced the idea of a garden-like cemetery on the edge of town as early as 1711, but it wasn’t until the 19th century that rural cemeteries caught on. When they did though, everything about death changed. With names like “Green-Wood” and “Forest Lawn,” graveyards came off as places of natural respite, not of decay and foreboding. Grassy lawns, flowering trees, and reflective ponds made them as much a place of repose for the living as for the dead. The skulls and crossbones of 16th century grave markers were replaced by more artistic, interpretive symbols like lambs, lilies, and open books. And unlike the restrictive religious burying grounds, in these new rural cemeteries of the 19th century, municipally operated and religiously unaffiliated, anyone was welcome to be interred. The living flocked to rural cemeteries in droves. In some places these were among the first parks open to the public, and when they opened Victorians would take day outings to the new cemeteries. Celebrity corpses were a draw, but so were those who became famous in death—tragic young women who threw themselves into rivers and pioneering balloonists who fell from the sky. Memorials, too, gave sculptors and artists a place to showcase their work, some of which became famous in its own right. Death was never more present than in the Victorian era. But rather than pretend it wasn’t there, people living in the 19th century got cozy with their final fate in bucolic grounds where the notion of beauty in death was celebrated.”

Even though this particular photographs are from a different cemetery, things were little different at Oak Hill. “As the product of mid-Victorian impulses, the grounds and other improvements of the site reflected the values and frame of mind of 19th-century Evansville. Its designers and superintendents captured the romantic moods important to city-dwellers in a total environment of greenery, walks, buildings, and grave markings. Popular local architects created buildings and mausoleums which were both functional and sublime, underscoring the Victorian’s urge to get the maximum benefit from their public works. More than simply the final resting place of prominent and not-so-prominent Evansville citizens, the Cemetery served as a vehicle for a wide range of cultural and urban events essential to an understanding of life in 19th-century America cities. … Oak Hill was there when citizens “became wearied with the sight of human faces, when the noise and bustle of the city grate harshly on the ear, when we feel an inward yearning for some quiet spot where we may rest in seclusion, undisturbed and alone.”” The following photographs display the pastoral beauty of this cemetery.

Both the administration building (1899) and the entrance gate (1901)were designed by the local architectural firm of Harris and Shopbell (see February 4, 2019 blog for more on this firm.)

One of the most touching memorials is this grave. Katie Sawyer was born in 1862, the daughter of a local doctor, and married a Louisville man in 1883. In May 1884, she delivered a baby girl but died in childbirth. The child was to have been named Elizabeth in honor of Katie’s mother, but in view of the circumstances, was named Katie for her late mother. Three months later, the infant Katie also died.

This is the Viele monument. Charles Viele came to Evansville in the 1830s and made his fortune in the wholesale grocery and liquor business. His fortune is evident in the house he built for his family at 400 SE Riverside Drive, pictured here circa 1977. It was built in 1855, remodeled in 1873, and still stands today across from the Evansville Museum of Arts, History, and Science, although the family has died out. 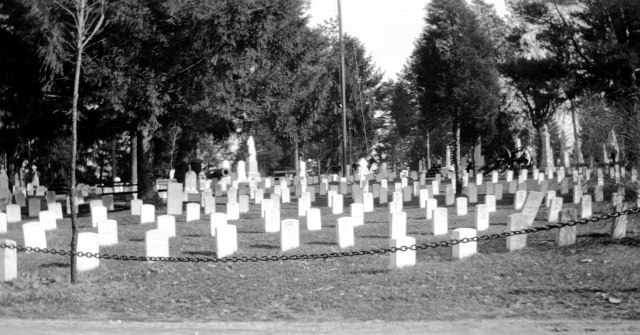 The cemetery also pays tribute to the Civil War dead, on both sides of the conflict. Both Union and Confederate soldiers, many of whom died in the Marine Hospital here (there will be a blog on this hospital posted the first week in November—be sure to look for it), lie under the same sod. The young boy is John W. Messick, a Civil War drummer boy, one of the youngest Union soldiers when he enlisted with his father in Company A, 42nd Indiana Volunteer Infantry, on September 3, 1861 at the age of 9 years, 2 months, and 2 days. He was honorably discharged in October 1864, died in 1892, and is buried in Oak Hill Cemetery. 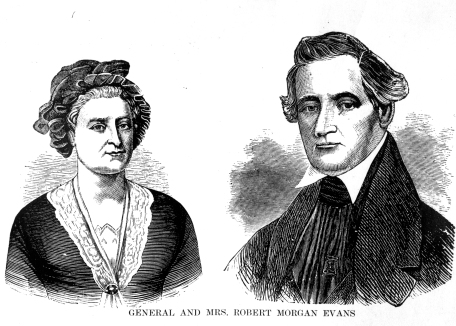 This portrait is of General and Mrs. Robert M. Evans, for whom the city of Evansville was named. According to information from the cemetery, they are in vaults with chains around them, and the top slabs of the stone are painted black.

William Heilman was a German immigrant and founder of Heilman Machine Works and a plow company (later known as Vulcan Plow under Major Albert C. Rosencranz who married Heilman’s daughter; Rosencranz is also buried at Oak Hill). Heilman was a member of Congress from 1879-1883 and died in 1890. His son, Charles F., was mayor of Evansville during 1910 to 1914. The life-sized statue of St. John atop this monument was erected in 1892. The photograph of the building located at 611 North First Avenue is now St. Vincent’s Daycare, but it was originally the William Heilman home.

Mead Johnson, founder of the Mead Johnson Nutrition company at the corner of the Lloyd Expressway and St. Joseph Avenue.

Albion Fellows Bacon (early 1900s housing reformer and for whom the local domestic abuse organization/shelter is named), her sister Annie Fellows Johnson (author of the Little Colonel books), and their parents, Rev. and Mrs. Albion Fellows (he was the pastor of the current Trinity United Methodist Church at 216 SE 3rd Street.)

Isaac and Elizabeth Harrison, king and queen of the gypsies—see April 29, 2019 blog for more details

Orr family, founders of the Orr Iron Company, which stood at the corner of the Lloyd Expressway and Fulton Ave. until it was razed in 2008. The doorway of that building can currently be seen in the University Center. The Orr Center building on campus is named for family descendent Robert D. Orr, former governor of Indiana. According to Oak Hill Cemetery’s website, the Orr monument was erected in 1884 and is made of blue crystal granite. The oak and laurel wreath that adorn it symbolize strength and victory. The monument weighs some 30 tons. Robert D. Orr is buried in Indianapolis at Crown Hill Cemetery.

Karl Kae Knecht, noted local and American cartoonist. Knecht went to work as the cartoonist at the Evansville Courier where his first cartoon appeared in September 1906. In addition to drawing cartoons for the paper, Knecht became staff photographer in 1917 when the newspaper bought its first camera and also wrote columns and reviews. His “Say, Kay! What of Folks, Shows, Animals N’ Such” column appeared weekly from 1919 until 1954. Knecht was named director of the paper and served as vice president from 1952 to 1960. For most of Knecht’s career, his cartoons appeared seven days a week on the front page until 1954 when they were moved to the editorial page. Knecht worked for the Courier for so long that he came to be known as the dean of editorial cartoonists. He retired from the Courier in May 1960 and died in Evansville, Indiana on July 28, 1972.

This blog could go on and on, but I suggest you consult the “Here Lies Evansville” Oak Hill Cemetery & Arboretum Walking Tour available online and/or look for a guided tour. Not all prominent Evansvillians are buried at Oak Hill, of course. The city’s other public cemetery is Locust Hill Cemetery. You can search both of these cemeteries online. Others are buried at private cemeteries.