Evansville faced a number of devastating fires in the 20th century … let’s take a peek at some of these. 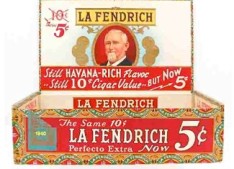 “The Fendrich family — a father, mother, and four brothers named Joseph, Charles, Francis and Herrmann — immigrated to the United States in 1833 from what is now Germany. A fifth brother, John, was born in the U.S. The brothers apprenticed in the several aspects of the Maryland tobacco trade and opened their first cigar shop, Francis Fendrich and Brothers Cigar Company, in Baltimore in 1850. Having found success, they opened a production facility in Pennsylvania. In 1855, the company expanded west, opening a shop and wholesaler on Main Street in Evansville to be closer to the tobacco trade in Kentucky, with river transportation allowing them to ship along the Ohio and Mississippi rivers. The family found great success in Evansville, expanding to a nearby five-story building also on Main Street. The company became one of Evansville’s largest employers, hiring mostly women in an era when female employment was uncommon. Fendrich competed with other local cigar manufacturers for workers. They advertised that all cigars were hand rolled, not with machinery, making the job safe for women.” Not only were women skilled in this work, but they were cheaper to employ than men, so by 1910, Fendrich was the largest manufacturer in Evansville, turning out 100,000 cigars a day.

Hermann Fendrich, Harry Wright, and John Hermann Fendrich in front of the Old Fendrich Cigar Factory in Evansville, Indiana. This is the original store at 105 Main Street. Because the business was so successful, it moved into a much larger facility in the next block. It is that building (seen below) which burned, 1885. Source: MSS 157-0506.

The old Fendrich Cigar Factory, at 105 Main Street, burned to the ground December 6, 1910, taking many nearby buildings with it. No lives were lost, but all of the company’s equipment and stock was destroyed. Perhaps the biggest issue was that the fire left more than 700 people out of work for nearly 2 years. Some of these buildings were rebuilt, but Fendrich moved its factory to 101 Oakley Street, the current site of Berry Plastics/Berry Global. It would take two years before a new factory was operational. “In the new factory, once machines were installed, four girls working one machine turned out 4,400 perfect cigars each ten-hour shift.” Fendrich stayed in operation for many more years, finally leaving Evansville/going out of business in 1969.

The next big fire to discuss was that of the H. A. Woods Drug Store at 1022 SE 2nd Street (at the time the address was 1144 Upper 2nd Street). “[George Washington] Haynie (1857-1939) was a well-known and respected business owner, public servant, and family man…. In addition to running his drug store from the late 1800s to 1928, he served as the commissioner of police, a board member of water works and safety, and president of the Indiana Druggist Association. President Grover Cleveland even appointed Haynie as surveyor of customs for the city. The local leader also was dubbed with the unique nickname, Mayor of Goosetown, in reference to the neighborhood’s large population of geese. Haynie’s drug store was situated on the first floor of a Second Street building designed by Weiss & Harris Architects, with his family home on the second floor above, where he lived with his wife Emma and their son Gilmore. Neighbors became Haynie’s longtime customers, calling him by name, and vice versa. But after his retirement in 1928, he sold the business to fellow Evansville druggist H.A. Woods.” This neighborhood is commonly called Haynie’s Corner in his memory. 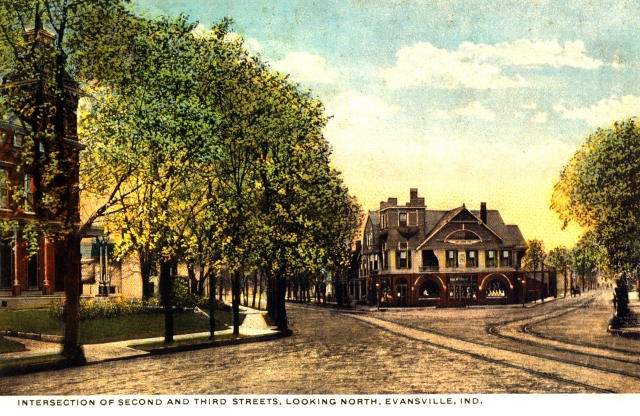 This building may have proved a bit unlucky … it was destroyed in the 1937 flood, rebuilt, and then destroyed again by fire which broke out early in the morning of March 26, 1944. Newspaper delivery boys discovered the fire and alerted the building’s residents shortly before an explosion was heard in the basement. The drug store occupied the ground floor and basement, while there were apartments above. Fortunately, everyone was able to evacuate without injury.

Before malls became meccas of consumerism, a city’s downtown was the heart of its shopping district. So, it was for Evansville, and one of its largest stores was the Economy Store, housed in the Arcade building at 316-326 Main Street. Built around 1895, here’s an early 1900’s view of the building. 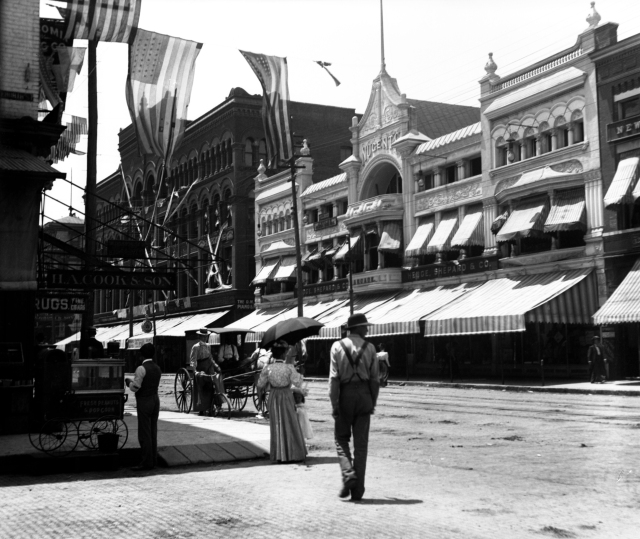 “Most of Evansville was asleep at 1:30 a.m. when the fire department alarms began to sound around the city as a bright orange blaze was spotted Downtown. By the time the first engines arrived a few minutes later, almost half the block of Main Street between Third and Fourth streets was ablaze and the fire was quickly spreading. The city Christmas wreaths were still on the double-acorn top streetlights and the entire area was as bright as morning. Newspaper reporters and photographers raced to the rooftops of the tallest buildings to watch in horror what was happening below. … The fire started in the rear of the Economy Store and quickly spread to the adjoining Walgreens Drugs on the corner (where the closed Roger’s Jewelry store now stands) then south across the alley to Reed’s Shoes and the Bon Marche. Nearly all of the fire department’s 180-man force, plus an additional 20 or so firemen from outlying towns, eventually were on the scene of the conflagration which by 2 a.m. had jumped across Main and set Hoffman’s clothing store ablaze and threatened the Citizens Bank tower (now Kunkel Square), set the Evansville Federal building alight, and threatened the Hulman Building. Fast acting firefighters created a “firewall” to protect both high rises. After several hours the fire was finally under control, but the central retail area of the city was in ruins and insurance estimators put the damage at $6 million ($58 million today). The fire destroyed or damaged 11 stores and six office buildings, and more than 200 people were unemployed as the large retail establishments were rebuilt. Some never re-opened and others took their place, like the Evansville Store. Several firefighters were injured and all suffered from the cold night air when temperatures fell to below freezing.” 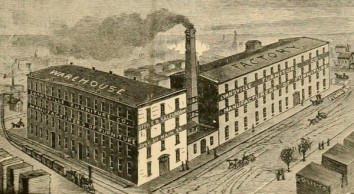 In the mid to late 1800’s, Evansville had more than 40 furniture companies. The availability of a wide variety of hardwoods nearby, along with an influx of German immigrants skilled in the lumber and furniture trade, contributed to this bounty. One of these businesses was the Evansville Furniture Company, at 1419 Pennsylvania Street (the original address was 301-305 West Pennsylvania Street), founded in 1870. There was a fire early in its history—in 1879—but the business was rebuilt. It was successful enough to warrant the construction of additional showroom space nearby. In the 1950’s, the business was sold to Universal Furniture Company; although it razed the extra showrooms, it operated until 1985. At that time, Corporate Design, Inc. moved in and is still in business there today.

On February 24, 1975, a four-alarm fire did massive damage to the structure.

Today you would drive by this building as you head west on the Lloyd Expressway—it’s just east of the Pigeon Creek bridge, the 4-story red brick structure on your right.

Later that same year, right before Christmas, Inland Marina on Waterworks Rd. suffered from a massive fire. According to the U.S. Coast Guard, $850,000 worth of pleasure boats were destroyed. At least 19 boats were involved.

You might know Inland Marina as the site where LST 325 is currently docked, until it moves to a new location on the downtown riverfront.

The last conflagration is that of the Upstage Dinner Theatre on January 16, 1977. The building itself was the former Elks Home/Club at 100 SE 1st Street. The Benevolent and Protective Order of Elks (a fraternal organization) built this building 1904-1906. A hotel had previously been at this location, but after it was razed, another nearby hotel owner offered the Elks some funding to build on this spot and thus eliminate the competition from another hotel. Over the years, membership dwindled, and in 1974, the Upstage Dinner Theatre took over this facility. It quickly became a popular entertainment venue, with the Stage Door Night Club operating out of the basement. 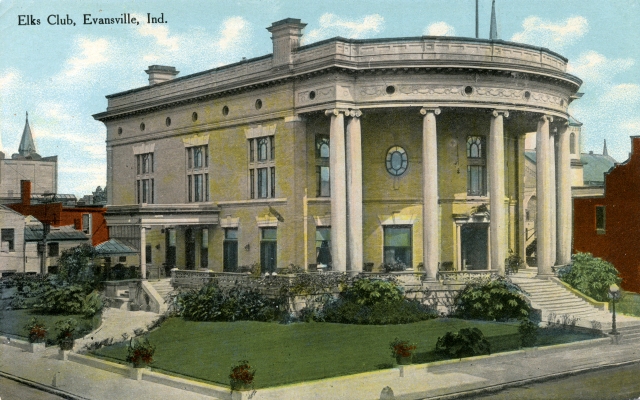 The winter of 1977 was brutally cold—the Ohio River froze, and the temperature was below freezing for 26 days in a row. For one 58-hour period, the temperature stayed below zero. On January 16 the overnight temperature dropped to 21 degrees below zero. It was COLD! Firefighters had a terrible battle after the fire broke out. “Water used to fight the fire froze quickly and encased the remains of the building in a sheet of ice, causing a delay in the investigation as to the cause of the fire. It was eventually determined that the fire started in the liquor store room of the Stage Door Night Club and declared an arson. Almost $1,000 in cash was found to be missing from a cash box in the store room, leading investigators to believe that the fire was started to cover up a burglary. In January 1978, just ahead of the one-year anniversary of the fire, the Vanderburgh Prosecutors Office announced that they would renew the investigation into the arson and determine if sufficient evidence existed to bring charges, but no charges were ever filed in the case.”

In the photographs below, note the snow the firemen are standing in, the frozen hydrant and pumper truck, and the fire set by the hydrant to keep the water flowing.

Amazingly, there were no casualties in all these fires. This blog utilizes a lot of UASC digital collections and highlights some of the “hidden” riches. Take a look and see what you can discover!