Why to Study History, or What the Defeat of the Spanish Armada Means for Health Care Today

Long before the advent of planes, trains, and automobiles, a great deal of transportation was by water. For the manpower used to provide this means of getting from point A to point B, it was a dangerous job. “Injuries due to engine or boiler explosions, wrecks, collisions with river snags and freight handling were common dangers. Exposure to extremes of temperature, from the sub-tropic heat of the Mississippi delta to frigid Great Lakes, claimed victims. Diseases affecting the boatmen included yellow fever, cholera, smallpox and malaria. While docked in the rough port towns of the time, violence, alcoholism and social diseases sent many boatmen to the marine hospitals.”

The concept of taking care of seamen goes back to early British precedents. “In 1588 England emerged as a sea power by defeating the Spanish Armada; recognizing the importance of seamen, the Crown created a marine hospital program. Funded through a tax of sixpence per month on Royal Navy seamen’s wages, the program soon expanded to include merchant seamen. During the 18th century this practice of providing health care to seamen spread to the colonies of British North America.” In 1798, reacting to an outbreak of yellow fever brought to this country by sailors, President John Adams signed the “Act for the Relief of Sick and Disabled Seamen.” By the next year, Congress had extended coverage to every U.S. Navy officer and sailor. Every month each seaman’s wages had .20 deducted to pay for health care—room, board, doctor’s care, and medications. The amount was also meant to fund the construction or rental of marine hospitals in major ports. The first federally owned marine hospital was located at Washington Point, Virginia, purchased from the state of Virginia in 1801. The first marine hospital built by this fund was in Boston. 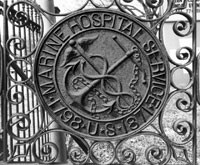 “The seal of the Marine Hospital Service honors its founding by President John Adams in 1798 and its conversion to the Marine Hospital Service in 1871. The seal was designed by America’s first Surgeon General, John Maynard Woodworth, and features a caduceus crossed with a fouled anchor. A fouled anchor represents a seaman or boatman in distress. The caduceus is the symbol of Mercury and was used by ambassadors as a sign of peace. It is also associated with trade and represents the Service’s long relationship to merchant seamen and the maritime industries.” Take a look at the Public Health Service seal at the end of this blog.

A bit closer to home, Kentucky Senator Henry Clay, in 1836, sponsored legislation to build a Marine Hospital in Louisville. “The hospital’s site, midway between the Louisville and Portland wharves, was selected for the “beneficial effect of a view of the water, and the impressions and associations it would naturally awake in the minds of men whose occupation were so intimately connected with it.” Federal architect Robert Mills completed his initial designs for marine hospitals [in 1837]. His plans focused on making the hospitals durable, fireproof, well-ventilated, and comfortable for the patients. Louisville’s hospital provided 100 beds and was the prototype for seven U.S. Marine Hospital Service buildings authorized by Congress.” The Louisville hospital opened on April 1, 1852. Below is a picture of the hospital as it stands today, after a 2005-2007 total restoration.

Evansville also had a Marine Hospital—actually, two of them. The first was built in 1856 at 916 West Ohio Street. It discontinued operation in 1870, at which time it was taken over by St. Mary’s, renovated and used as its hospital until 1894 when St. Mary’s moved to a new location. It was razed in 1912.

A new Marine Hospital for Evansville was built at 2700 West Illinois Street in 1888 and operated there until it closed in 1947. Between 1949 to 1975 it served as a U.S. Navy and Marine Corps training center/reserve training center. A 1981 fire put an end to any thoughts of renovation/reuse, and it was razed around 1984.

“All classifications of river workers were eligible for treatment. Every mariner, including pilots, captains, cooks, pursers, engineers, stevedores, roustabouts and deckhands, were eligible for treatment and care. It is estimated that one-third of the patients were African-Americans.” The importance of Marine Hospitals cannot be overstated. “Mariners, by the nature of their work, were usually away from home during period of illness or injury, so even the flawed safety net provided by the Fund became an important comfort. By the 1850s more than 10,000 mariners, between 5% and 10% of the American maritime workforce, were receiving marine hospital benefits each year.”

By the time of the Civil War, there were 27 Marine Hospitals in operation. “By comparison, the U.S. Army had 98 medical officers, 20 thermometers, 6 stethoscopes and a few medical text books. The Army of the Confederate States of America had 24 medical officers. In 1864 only eight USMHS hospitals were in operation; the others being taken over for military operations.” The Marine Hospital in Louisville treated Union soldiers wounded at Shiloh, Perryville, and other major battles during 1861-1863 before closing for the rest of the war.

After the Civil War, the role of marine hospitals began to change, no longer focusing solely on the care and treatment of seamen. In 1870 the service’s headquarters were moved to Washington, D.C. and put under the control of a supervising surgeon, a position which eventually became the Surgeon General. The first to hold this office was John Maynard Woodworth, who instituted a military model for medical staff. Reforms included examinations for applicants and required uniforms. Promotion and tenure was based on merit, not political influence. His doctors grew to be career-service practitioners who could be assigned to any marine hospital. “The prevalence of major epidemic diseases such as smallpox, yellow fever, and cholera spurred Congress to enact a national law in 1878 to prevent the introduction of contagious and infectious diseases into the United States, later extending it to prevent the spread of disease among the states. The task of controlling epidemic diseases through quarantine and disinfection measures as well as immunization programs fell to the Marine Hospital Service and hastened its evolution into the Public Health Service which served the whole nation.” 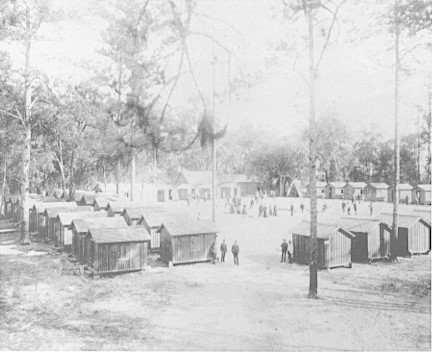 Wharves were disinfected and ships fumigated. In 1888, a yellow fever detention camp was set up near the Georgia/Florida state line, and anyone traveling from an area were yellow fever was prevalent was mandated to stay in this camp for the incubation period of 6-10 days before moving on. “United States troops in the Spanish-American War suffered from yellow fever. Fear of its spread to the mainland after the end of hostilities in 1899 invoked large-scale efforts by the Marine Hospital Service to ensure adequate quarantine inspection of troops being returned from Cuba and Puerto Rico.” An 1891 immigration law made inspection of all immigrants coming into the country mandatory, with the largest inspection station located on Ellis Island. Other disease control efforts included controlling a bubonic plague outbreak in New Orleans 1914 to 1916, rural sanitation, studying working conditions, health education, eradicating smallpox through effective vaccination, introducing penicillin as a treatment for venereal diseases, malaria control programs, using the iron lung for polio patients, and toxic substance detection. Quarantine efforts were even extended into space for the Apollo moon landings.

Origins of the National Institutes of Health. National Library of Medicine.