This German Christmas carol celebrates the beauty of the Tannenbaum, or fir tree.  The earliest lyrics date to 1550, but this is the best known version, created in 1824 by Ernst Anschütz, a Leipzig organist. The melody is an old folk tune.  You probably know this as “Oh, Christmas Tree!”  There are many English versions of this song, but here’s one that is commonly sung.  The translation is not literal, but it preserves the spirit and meaning of the original German.

In the northern hemisphere, the winter solstice falls on December 21/22—the shortest day and the longest night.  For ancient peoples, this could be a scary time and one of hardship.  Everything appears dead.  Some animals disappear into hibernation.  The sun, the source of light and heat, seems weak at its low elevation.  “In beauty green will always grow, Through summer sun and winter snow”….long before Christianity, an evergreen symbolized hope, the return/continuation of life and the sun.

“The ancient Egyptians worshiped a god called Ra, who had the head of a hawk and wore the sun as a blazing disk in his crown. At the solstice, when Ra began to recover from the illness, the Egyptians filled their homes with green palm rushes which symbolized for them the triumph of life over death.  Early Romans marked the solstice with a feast called the Saturnalia in honor of Saturn, the god of agriculture. The Romans knew that the solstice meant that soon farms and orchards would be green and fruitful. To mark the occasion, they decorated their homes and temples with evergreen boughs. In Northern Europe the mysterious Druids, the priests of the ancient Celts, also decorated their temples with evergreen boughs as a symbol of everlasting life. The fierce Vikings in Scandinavia thought that evergreens were the special plant of the sun god, Balder.”

Fast forward to the 16th century, when it is generally agreed that putting up a Christmas tree inside your house became the thing in Germany.  The National Christmas Tree Association says that  in 1510, “the first written record of a decorated Christmas Tree comes from Riga, Latvia. Men of the local merchants’ guild decorated a tree with artificial roses, danced around it in the marketplace and then set fire to it. The rose was used for many years and is considered to be a symbol for the Virgin Mary.”  One legend attributes Martin Luther with decorating one of the first Christmas trees with candles.  The story is thus: “One Christmas Eve the great religious reformer found himself walking through the woods.  The beauty of the stars shining through the branches of the fir trees greatly moved him.  He cut down a small tree, brought it home with him, and covered it with lit candles, explaining to his family that its light and beauty represented Christ, the light of the world.  Although this legend helped to increase the popularity of the Christmas tree, it should be pointed out that the earliest known document describing a Christmas tree lit with candles was written about a century after Luther’s death.” (Encyclopedia, p. 142)

Not everyone was in favor of such celebrations of Christmas.  “Most 19th-century Americans found Christmas trees an oddity. The first record of one being on display was in the 1830s by the German settlers of Pennsylvania, although trees had been a tradition in many German homes much earlier. The Pennsylvania German settlements had community trees as early as 1747. But, as late as the 1840s Christmas trees were seen as pagan symbols and not accepted by most Americans.  It is not surprising that, like many other festive Christmas customs, the tree was adopted so late in America. To the New England Puritans, Christmas was sacred. The pilgrims’s second governor, William Bradford, wrote that he tried hard to stamp out “pagan mockery” of the observance, penalizing any frivolity. The influential Oliver Cromwell preached against “the heathen traditions” of Christmas carols, decorated trees, and any joyful expression that desecrated “that sacred event.” In 1659, the General Court of Massachusetts enacted a law making any observance of December 25 (other than a church service) a penal offense; people were fined for hanging decorations. That stern solemnity continued until the 19th century, when the influx of German and Irish immigrants undermined the Puritan legacy.”

Most credit Queen Victoria with spreading the popularity of the Christmas tree.  Her mother was German, so she would have grown up accustomed to having a Christmas tree.  “In 1846, Queen Victoria and her German husband Albert were sketched in the Illustrated London News standing with their children around a Christmas tree at Windsor Castle. German immigrants had brought the custom of Christmas trees to Britain with them in the early 1800s but the practice didn’t catch on with the locals. After Queen Victoria, an extremely popular monarch, started celebrating Christmas with fir trees and presents hung on the branches as a favor to her husband, the layfolk immediately followed suit.”

While most Americans would not have read or been impressed with the London News, this photograph was reproduced in the American publication, Godey’s Lady’s Book, about 2 years later.  Interestingly, the picture was “Americanized” by removing Victoria’s tiara and Albert’s mustache! Godey’s had a wide circulation and soon a Christmas tree in the American home was just the thing.  Not all Americans were on board, however: “in 1901, Theodore Roosevelt tried to stop the practice of having Christmas Trees out of concern about the destruction of forests. His two sons didn’t agree and enlisted the help of conservationist Gifford Pinchot to persuade the president that, done properly, the practice was not harmful to the forests.”  Some firsts in the American Christmas tree tradition include: 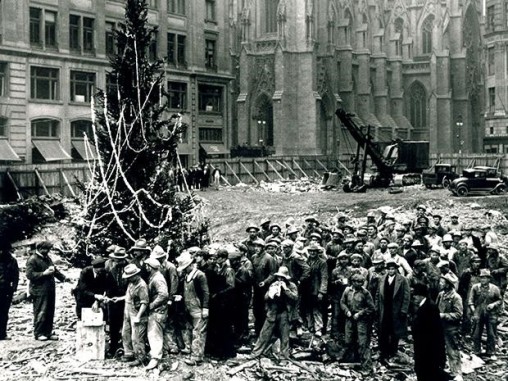 Once you put up a tree, you need to decorate it.  Not everyone was willing to use blasting cap ends!!  In medieval times, apples were used to decorate what were then called “paradise trees,” representing Adam and Eve in the Garden of Eden.  In the 1600s, decorations included items like roses made from colored paper, and of course, food.  “Indeed, a wide variety of ornaments made from food dangled from early German Christmas trees.  The Germans hung gilded nuts, and later, cookies. … Fruits and vegetables molded out of marzipan and colored with vegetable dyes soon followed.  Some people made ornaments out of eggshells, transforming them, for example, into tiny baskets which could be filled with candy.  In fact, the traditional German Christmas tree was covered with so many good things to eat that it was nicknamed a “sugar tree.”  Children looked forward to dismantling the tree on January 6, Epiphany, because they were then allowed to gobble up all the treats that had tempted them throughout the Christmas season.” (Encyclopedia, p. 440) Americans continued the food decorations tradition and added strings of cranberries and popcorn.  In the 19th century, small presents and trinkets also festooned the branches.

Commercially produced blown-glass ornaments began the rage in the mid to late 1800s.  The town of Lauscha, Germany was in a river valley and ideally situated for the glass business, with the first glassworks there established in 1597.  After the public saw the illustration of Queen Victoria’s tree, the rush was on.  “Demand was so high that the entire town was quickly drawn into the ornament industry.  Whole families worked side by side, with the adult men molding the glass, the adult women silvering and painting the ornaments, and children breaking the glass stems and attaching metal caps.” (Encyclopedia, p. 442-443)  In America, glass ornaments “hit the big time” when Woolworth’s  got on board.

Hand made glass ornaments from the Source: https://tinyurl.com/rhxzp4r

“In the 1880s it was the American dime-store magnate F. W. Woolworth who discovered Lauscha’s glassworks during a visit to Germany. Despite his initial reluctance to stock the glass ornaments, he later made a fortune by importing the German glass ornaments to the U.S. Ironically, he was selling $25 million worth of ornaments by 1890 at nickel and dime prices.”  In the 1920s German glass began to face competition from Japan and Czechoslovakia, but it was WWII that really devastated the German glass industry.  After the chaos of the war, Lauscha became Soviet territory. “With the Russian occupation of Germany in 1953, many of the old world family molds that had been passed down for generations among all the families in Lauscha were destroyed. Families were splintered when craftsmen fled their homeland to settle in Neustadt, a territory that was then occupied by Americans.”  Despite it all, glassworkers still operate in Lauscha—nearly 50% of Lauscha families today make their living in the glass industry.  WWII did open up the market to American ornament makers—Corning Glass and Hallmark Keepsake Ornaments now contribute to the huge variety of Christmas tree decorations available.

Mere decorations are not sufficient–oh, no, a Christmas tree must be lit!  The earliest lighting was done with candles, or for the less well-off, wicks in walnut shells filled with oil.  “The candle-lit Christmas tree, to no one’s surprise, had some problems. For one, it was hard to keep the candles attached to the branches. People tried pinning the candle down with a needle, tying the candle to the branch with wire or string, and using melted wax as an adhesive. None of these methods worked very well. Fortunately, a breakthrough came in the form of Frederick Artz’s 1878 invention: a clip-on candleholder. But even if you got the candles to stay, there was the little manner of having a very large, vary flammable tree in your living room. People usually kept the candles lit for no longer than 30 minutes at a time, kept an eye on the tree the whole time, and always had a bucket of sand or water at the ready in case of fire. Of course, accidents still happened. Eventually, a group of insurance companies collectively refused to pay for fires started by Christmas trees and began putting a “knowing risks” clause in their policies.”  In 1882, an associate of Thomas Edison named Edward Hibberd Johnson figured out how to use electricity to light a Christmas tree.

“Those first bulbs, however, lacked screw-in sockets and required the tedious process of wiring each lamp individually, a task that few had the knowledge or time to undertake. As a result, members of high society spent as much as $300 per tree to hire electricians to install lights on their conifers and be on call in case a bulb burned out or broke.”  In 1894, President Grover Cleveland enjoyed the first electrified White House Christmas tree.  In 1903, General Electric made Christmas lights that were ready to use and within the reach of the average customer, cost wise.  It was not until the 1940s when electrification reached most of the country, allowing for Christmas tree lights in more rural areas.  After WWII, the invention of “parallel” lighting meant that one bulb burning out did not extinguish the entire string.

So there you have it—if your family puts up a tree and decorates it, this is how that all came about.  Of course, not everyone celebrates this holiday, but whether you do or not, here’s to good luck on your finals, and to a relaxing break from classes and studying.  See you back here in 2020!

The History of the Christmas Tree Goes Back Farther Than You Might Realize.  Country Living, September 4, 2019.

Puiu, Tibi.  “The Origin and History of the Christmas Tree: From Paganism to Modern Ubiquity.”  ZME Science, December 8, 2017 update.

“The Tree Through the Years: Holiday Highlights Since 1931.”  Rockefeller Center, 2015.