in University Archives and Special Collections these days! UASC is celebrating the Brothers Grimm, known for their fairy tale collections. Keep an eye out—you may see Rapunzel or Little Red Riding Hood or Rumpelstiltskin wandering through the department … maybe even the big, bad wolf. Let’s look at the men who created such a lasting impression on our literature.

Jacob Ludwig Carl Grimm (1785-1863) and Wilhelm Carl Grimm (1786-1859) were the eldest in a family of 5 boys and 1 girl. Their father, Phillipp Wilhelm, was a lawyer, whose 1796 death impoverished his family. The subsequent death of their mother in 1808 put the sole responsibility for a family of six squarely upon the shoulders of the then 23-year-old Jacob.

The original intention was for Jacob and Wilhelm to pursue the study of law and follow their father’s footsteps into civil service careers. Indeed, they studied law at the University of Marburg between 1802 to 1806. Now called Phillips University Marburg, this is the oldest Protestant university still in existence, founded in 1527. 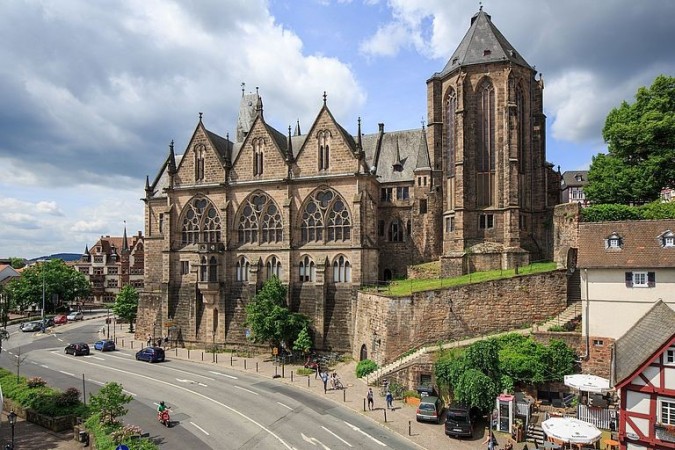 “At Marburg they came under the influence of Clemens Brentano, who awakened in both a love of folk poetry, and Friedrich Karl von Savigny, cofounder of the historical school of jurisprudence, who taught them a method of antiquarian investigation that formed the real basis of all their later work. Others, too, strongly influenced the Grimms, particularly the philosopher Johann Gottfried von Herder, with his ideas on folk poetry.  …  In 1805 Jacob accompanied Savigny to Paris to do research on legal manuscripts of the Middle Ages; the following year he became secretary to the war office in Kassel. Because of his health, Wilhelm remained without regular employment until 1814. After the French entered in 1806, Jacob became private librarian to King Jérôme of Westphalia in 1808 and a year later auditeur of the Conseil d’État but returned to Hessian service in 1813 after Napoleon’s defeat. As secretary to the legation, he went twice to Paris (1814–15), to recover precious books and paintings taken by the French from Hesse and Prussia. He also took part in the Congress of Vienna (September 1814–June 1815). Meantime, Wilhelm had become secretary at the Elector’s library in Kassel (1814), and Jacob joined him there in 1816.  By that time the brothers had definitely given up thoughts of a legal career in favour of purely literary research.“

The brothers’ research was strictly academic, and they collected tales from many other cultures. They would not have conceived of today’s view of their fairy tale collection as the most famous in the western world and second only to the Bible in its popularity in German-speaking nations.

“What compelled the Grimms to concentrate on old German epics, tales, and literature was a belief that the most natural and pure forms of culture—those which held the community together—were linguistic and based in history. According to them, modern literature, even though it might be remarkably rich, was artificial and thus could not express the genuine essence of Volk culture that emanated naturally from experience and bound the people together. Therefore, all their efforts went toward uncovering stories from the past.  In their preface, the Grimms explained their interest in the culture of the common people, and their intention in recording their tales:  “It was perhaps just the right time to record these tales since those people who should be preserving them are becoming more and more scarce. …  Wherever the tales still exist, they continue to live in such a way that nobody ponders whether they are good or bad, poetic or crude. People know them and love them because they have simply absorbed them in a habitual way. And they take pleasure in them without having any reason. This is exactly why the custom of storytelling is so marvelous.” In short, the Grimms’ first collection was shaped as an archaeological excavation and as a book for adults and for scholars. Their tales were not to be classified as children’s stories, not even today.“

The first published collection came out in 1812 with a 2nd volume in 1814– Kinder- und Hausmärchen (Children’s and Household Tales). These volumes contained some 200 stories. The brothers continued to collect and hone the tales for a total of 7 editions in 40 years. The 7th, published in 1857, is considered the definitive edition and is the source of all posthumous editions and translations. This edition is quite different from the 1812 one.

Let’s be clear about two things—first, the brothers collected the stories from a variety of oral traditions—they did NOT write them. Second, these fairy tales, at least in their original state and in the Grimms’ first edition, were not at all the sanitized, happy-ending stories that delight children, but rather harsh stories about miserable living conditions.  Sample titles included “The Hand with the Knife,” “How Some Children Played at Slaughtering,” and “The Children of Famine.” This last story tells of a mother with 2 daughters who are so poor they have not a morsel to eat. The mother becomes unhinged and tells her daughters that she has to kill them in order to get something to eat.

“Originally, Grimm’s Fairy Tales were not meant for children. The stories routinely included sex, violence, incest, and copious footnotes. Worse yet, they didn’t even have illustrations. Initially aimed at adults, the early editions of Nursery and Household Tales contained remarkably dark elements. In its original version, for example, Rapunzel gets pregnant by the prince after a casual fling. In Cinderella, the stepsisters cut off their toes and heels to try to fit into the slipper. These sort of scenes (and many others) were eventually revised once the stories became popular among children.“

Because of their popularity, the Grimms found it impossible not to do some judicious editing to make the tales appeal to a broader audience with more “delicate” sensibilities.  Stories became longer with more literary flourishes. Biological mothers who were the villains in the original tales became stepmothers. Rapunzel no longer got pregnant or even appeared to have sex, for that matter. Some stories simply got cut.

“One such story was the aptly-named “How Some Children Played At Slaughtering.” In it, two children play as a pig and a butcher. As part of the game, the older brother slits his younger brother’s throat, killing him. When their mother finds the scene, she becomes so enraged that she kills the older brother. While she was off doing this, the youngest son drowns in the bath. Now the mother is so despondent that she hangs herself. Eventually, the father returns. When he finds his whole family dead he, too, dies—of heartbreak. Even with a liberal approach to editing, it’s unlikely such a story could be Disneyified.“

It turns out that the original Brothers Grimm tales really were grim!

Here are a couple of examples of fairy tale stories from the Brothers Grimm, found in UASC: 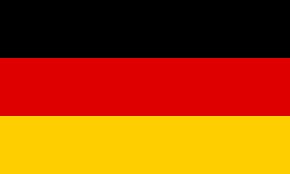 As an adjunct to this celebration of fairy tales, UASC is displaying items from its collections that highlight the German culture, just as the Grimm brothers celebrated it through their research and collection of folk tales. In particular, displays will focus on the strong German heritage in Evansville.

“The Demokrat is the only daily German newspaper in the First Congressional District of Indiana, where well-to-do Germans constitute the larger part of the thriving population of over 250,000. Distinctly a German paper in a German territory, and it covers Evansville and the tributary like a blanket. Its field is an exclusive one. It thoroughly covers a field that no other publication can ever expect to reach. The Demokrat circulation represents quality. Demokrat readers are cash buyers and large consumers.”

Many German immigrants came to Evansville starting in the mid-1800’s, and a large number settled on the west side of town. Separated from the rest of the city by Pigeon Creek, the area developed its own German identity, although there was plenty of social and business interaction. With the U.S.’s entry into World War I, anti-German sentiment arose and there was a need for immigrants to prove themselves as real, patriotic Americans. This fact probably accounts for the 1918 demise of this newspaper. The building was razed in the 1940’s.

Another local German language newspaper was the Evansville Volksbote, which was only published in 1851 to 1852.  A rough translation of this title would be the people’s messenger. The publisher is listed as J. Rohner.  The Rohner family was from Heiden, Switzerland, and a John Henry Rohner came to this country in 1847 and was the editor of a German language newspaper, probably the one shown below. A collection of these newspapers was donated by a descendent, Arthur Thomas Rohner (1901-1987).

Another important aspect of German culture is singing. Evansville had several singing societies at one time, but the only one that remains is the Germania Maennerchor (maennerchor means men’s chorus). Here’s a picture of the founding members, circa 1900.

The Germania Maennerchor’s building is at 916 North Fulton Avenue. For 58 consecutive years it has hosted a volksfest, serving over 10,00 meals and 3200 gallons of beer yearly. 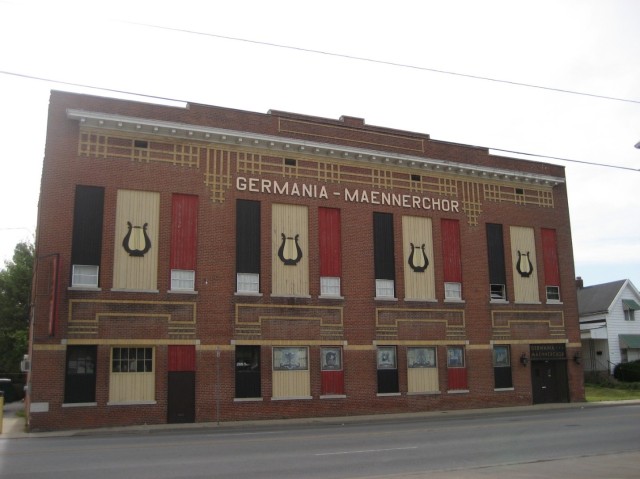 The man seated on the first row of this picture of a Germania Maennerchor group is August Illing, a four-time president of the organization.

A singing society that did not survive was the Liederkranz Maennerchor, which practiced in this building at 302 Market Street from about 1911 to 1918. (The building was sold to the Knights of Columbus in 1918 and still stands today as part of a larger facility for senior living.)

A prominent display of Evansville’s pride in its Germanic heritage was the German Day parade organized by the city’s German elite around 1890 to celebrate German cultural, intellectual, and technological achievements. After the 4th of July, this was the most prominent civic celebration each year until World War I ended it.

Reference has been made to impact of WWI on the expression of German culture.   For a more in-depth look at this issue, read the upcoming blog entitled “Sprechen Zie Deutsch?”

Myint, B.  “5 Facts About The Brothers Grimm.”  Biography online.