It’s interesting how people’s lives can cross paths, the lives and purposes of two people you’d never expect to intersect do so, albeit briefly. One such story features a world-renowned inventor and a local soap maker.

Thomas Alva Edison was born February 11, 1847, in Milan, Ohio. Largely home-schooled by his mother, he learned the art of telegraphy in the early 1860’s and pursued that line of work. His growing deafness made it hard to hear the auditory signals of the telegraph, so he worked to develop devices that would enable him to continue his telegraphy career.  He was successful, and so in 1869 he decided to quit telegraphy and devote himself entirely to invention. The rest, as they say, is history! “By the time he died on October 18, 1931, Thomas Edison had amassed a record 1,093 patents: 389 for electric light and power, 195 for the phonograph, 150 for the telegraph, 141 for storage batteries and 34 for the telephone.” 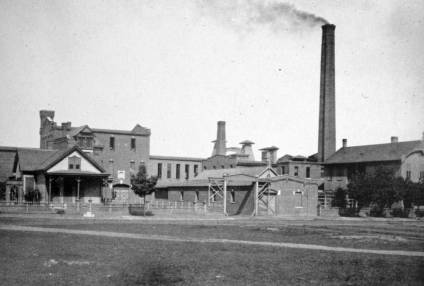 Adolph Melzer was born March 17, 1845 in Christburg, Prussia, Germany. It’s not known when he and/or his family immigrated to the United States, but by 1871 he and his father owned a soap factory at 1007 West Maryland Street in Evansville, Indiana. The firm was quite successful—the American Soap Journal and Manufacturing Chemist had an article in 1903 about the firm and was quite laudatory. It noted that the Melzers “preferred to attend their soap-boiling personally, at the same time keeping a general supervision over the other departments.  The results of this close application, coupled with a thorough scientific training and complete facilities for chemical and physical investigation and experiment, have been the development and utilization in their factory of various improvements … furthermore, during the thirty-two years of their business existence, they have not had a single box of soap returned because of poor quality, nor have they had a fire, failure, lawsuit, strike or accident involving the loss of a human life or limb …”

How did the world of an Evansville, IN soap manufacturer and that of the Wizard of Menlo Park (New Jersey—the site of Edison’s laboratory) meet? In 1877, Edison invented the phonograph. The very first recordings were on sheets of tinfoil—not very practical or durable, more of a novelty. Once the novelty wore off, Edison returned to his work on electric lighting and did not return to the phonograph until 1887. He introduced wax cylinders which could hold about 3 minutes’ worth of recording. To his chagrin, there was not enough immediate demand to make his plans for mass-produced cylinders worthwhile, but eventually the demand rose, and by 1902 his National Phonograph Company recordings were made on more durable hard wax. Edison and his chemist, Jonas Aylsworth, had struggled to perfect the formula for a durable medium that did not sweat, decompose, or fog up in warm weather.  Once they hit upon the solution, it stayed a closely held secret.

The Columbia Phonograph Company had purchased and used thousands of Edison recording blanks until 1894, when Edison ceased to supply them. Columbia was desperate to find a way to make blanks itself—without them, it would be forced to default on contracts for recordings and face lawsuits.  It knew the tempering agent was some sort of metallic soap but could not identify the precise formula.  An ad was placed in the American Soap Makers’ Journal and Adolph Melzer answered it. He was able to devise a comparable formula to Edison’s and sold it to Columbia, probably around 1895.

Evidence was found of correspondence between Edison and Melzer as late as 1916; it is not known if there was ever more contact than this between the two men. Edison went on to invent many more devices and rack up all those patents. Melzer’s soap factory ceased operation in 1920 and was sold. The building itself remained standing and occupied by at least four other businesses until it was destroyed by fire in 2014. According to his obituary in an 1924 issue of Soap Gazette and Perfumer, “In 1912 he placed a trust fund in the National City Bank of $1,000, to be given to the city of Evansville at the expiration of 250 years. The fund at that time will amount to $19,956,400.13. … Mr. Melzer was also the originator of the Evansville Humane Society for the protection of dumb animals, in which work he took a great interest and made many contributions towards furthering the same.”

“In 1910, the National Humane Alliance and Adolph Melzer, soap manufacturer and animal lover, erected a five- ton, granite horse trough in front of the Municipal Market, located in the intersection of what was then Market and Pennsylvania Streets. About 125 similar troughs were constructed throughout the county, most at busy intersections. The troughs, including Evansville’s, were later deemed traffic hazard in an age of automobiles and were removed or relocated. Horse trough-supporters protested the move, advocating for it to remain at the intersection in numerous letters to the editors. This photo, arranged by a photographer at the Evansville Press in January 1960, brought a horse to drink from the fountain for the first time in decades, only to find the water frozen. In February 1962, the trough was moved to the grounds of Evansville Museum. During Main Street renovation in 1971, it was repurposed as a fountain on the walkway, where it can still be found between Third and Fourth Streets.” Below is the fountain today, in front of 310 Main Street. 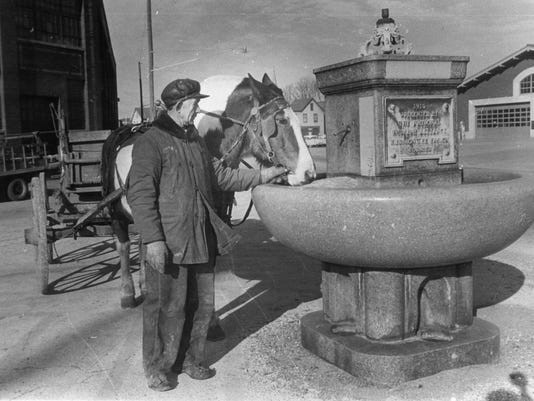 Adolph Melzer’s life came to a sad and mysterious end in 1923. He went to Deaconess Hospital in late September of that year for an infection and was treated successfully. He seems to have disappeared from the hospital on September 29 and was not found until October 2 in the river near the boat club, an apparent suicide.