On September 14, 1901, William McKinley, the 25th President of the United States was assassinated by anarchist, Leon Czolgosz. The assassination of President McKinley occurred in the Pan-American Exposition in Buffalo, New York; however, a public service was held in Evansville in remembrance of the late president. The service was held by Charles Harvey Denby, colonel of the 42nd Indiana Volunteer Infantry Regiment during the American Civil War and former ambassador to China, from 1885 to 1898. This pamphlet is housed in the University Archives and Special Collections on the 3rd Floor of the Rice Library. 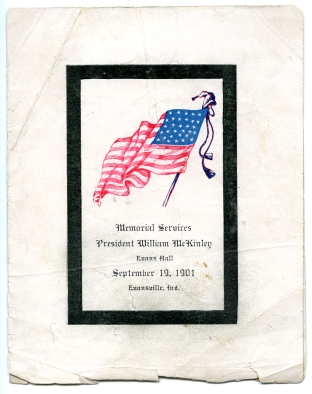