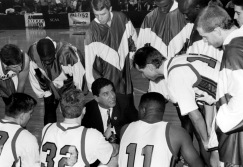 Head Coach, Bruce Pearl, is located in the center. (n.d.)

The Screaming Eagles came close to success but did not win the title. Cal State Bakersfield, 92-86 (University of Southern Indiana “1993-1994”, 2017), defeated USI. In the archives, “1994: An Elite Season” recaps their season and is available to view.