The crowds are going crazy! Pure pandemonium! Arch Madness is back and we have some stiff competition. The University Archives and Special Collections (UASC) is competing against the Lawrence Library, Evansville Museum of Arts, History, & Science, and Willard Library. You can vote online at amusingartifacts.org or in-person at Rice Library 3021. The Final 4 voting begins March 25 until March 31 at 11:59 PM CST. 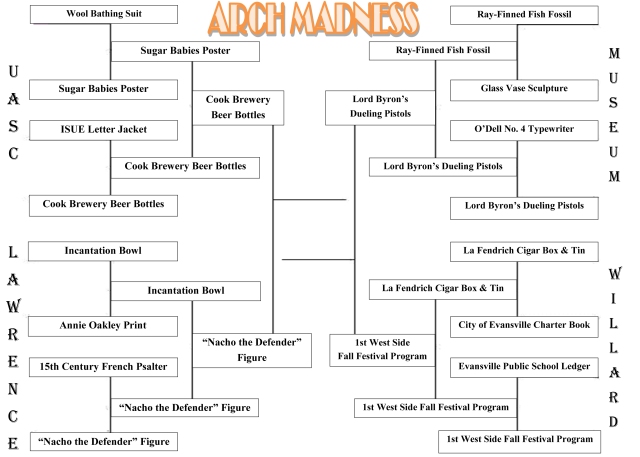 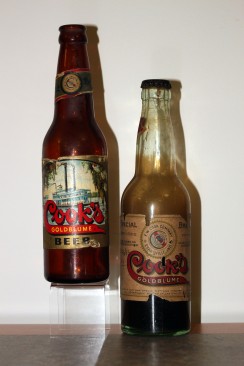 A city with a strong German heritage, Evansville once had as many as seven breweries. One of the largest was F.W. Brewing Company. The company began in 1853 as a partnership between Fredrick Washington Cook and Louis Reis. Cook became the sole owner in 1873 and the company was incorporated as F.W. Brewing Company in 1885. With small name changes, it was in business until the mid-1950’s. Goldblume Beer, which they advertised as “The Best Beer in the World” was one of their signature brews. Note that one of these bottles still contains some beer! 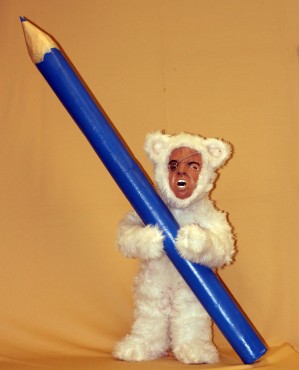 Nacho the Defender, a toddler sized figure, is a part of the greater installation piece “Child’s Play” by Matt Perez. Nacho’s role within the work is to defend the pillow fort from other attacking toddlers. This figure belongs to the University Art Collection, Efroymson Fellow Collection.

These pistols were made for the famous English poet and politician Lord George Gordon Byron, 1788-1824. Among Byron’s best-known works are Don Juan and Childe Harold’s Pilgrimage. Lord Byron had several controversial relationships before he married Annabella Milbanke in 1815 who left him a year later because of his infidelity. The pistols are engraved with Lord Bryon’s coronet and a “B” and were crafted by H.W. Mortimer and Company of London circa 1809. These dueling pistols are gifts of Harry D. Oppenheimer.

Official Program of the West Side First Annual Fall Festival, 1914.

Sponsored by the West Side Business Association, the current West Side Nut Club began in 1921, but prior to that, three “Halloween type festivals” were held. The purpose of the festivals was “to initiate, promote, and support any and all movements which are for the betterment of the West Side of Evansville as a whole…”.